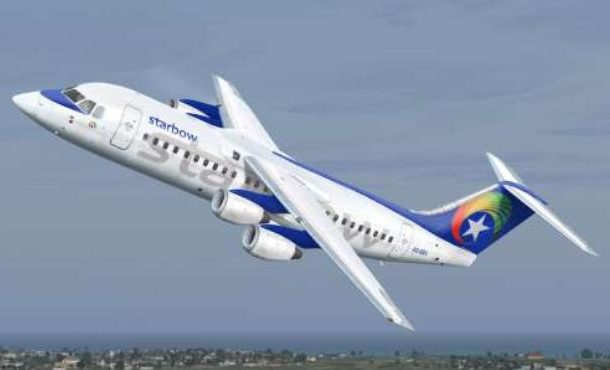 Starbow Airlines has resumed its flights from Accra to Tamale with its new aircraft and a commitment to stay on the route.

Mr James E. Antwi, the Chief Executive Officer of Starbow, said the suspension of its Tamale flights was due to circumstances beyond its control but these have been resolved, thus the resumption of flights.

The flights, using it new 97-seater Avro RJ 100 aircraft, will run once-daily flights until 7th October 2016, when it will operate twice-daily flights between Accra and Tamale.

'I can assure Tamale people that this is not going to stop, the suspension was due to circumstances beyond our control but now we're back and we're not going to stop today or tomorrow,' he said.

Starbow's resumption of flights to Tamale has broken Africa World Airlines monopoly on the route in recent times and offers passengers more choice and flexibility in their travel.

Mr Antwi said the promotional price of GHâ‚µ325.00 will run until the market determines whether it will increased or reduced, but noted that it was always better to charge low fares and get more passengers than high ones with few passengers.

Starbow is also expected to take delivery of two more aircrafts to its fleet by January 2017.

The next aircraft will arrive at the end of October and the other in January 2017.

He said the airline was still pursuing its vision of operating sub-regional flights from Accra and will fly to Liberia, Nigeria, Guinea (Conakry) and Burkina Faso.

'We should start going to Liberia by November 2016,' he said adding that the airline will also resume its Sunyani flights in mid-October, 2016.