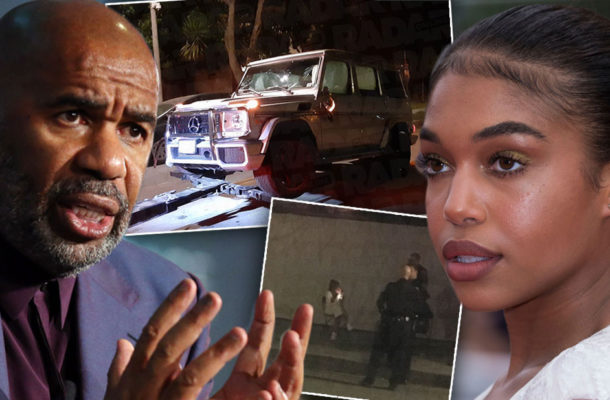 Lori Harvey, Steve Harvey's 22-year-old step-daughter has been arrested by the Beverly Hills Police Department after an accident she was involved in on Sunday October 20.

The model linked to Diddy months ago was reportedly texting and driving when she crashed into another car, causing her Mercedes SUV to flip over.

An eyewitness said she was pulled out of her car by the man whose car she crashed into.

Lori was stopped from walking home by police officers who turned up at the scene of the accident.

The TV host's daughter was arrested on two counts of misdemeanor hit and run and delaying a police investigation after she face-timed her famous dad by 9:48 p.m.

“She was arrested for the two charges and released on scene, not booked. She identified herself properly and signed a written promise to appear in court,” the watch commander at BHPD told Radar.


It was further learnt that the accident occurred in a part of town where people were celebrating a Jewish festival called Succoth.