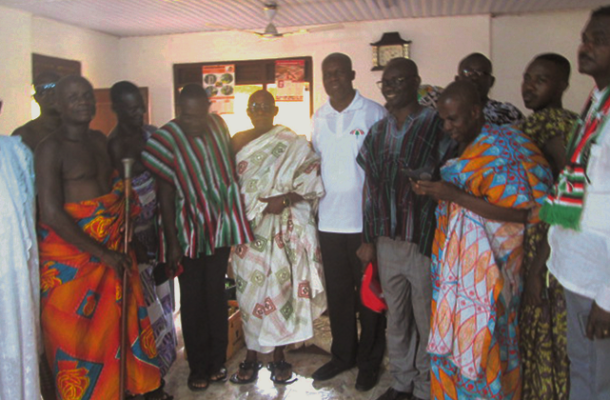 The leadership of political parties have been called upon to restrain their youth and party activists from hurling insults at their political opponents to discredit them in order to gain electoral advantage in the December polls.

They have also been urged to make their youth aware that insulting political leaders in the name of politics is not right and should therefore desist from such acts, since it does not augur well for the growth of our fledgling democracy.

The Chief of Agona Swedru, Ogidigram Okrupi Nana Kobina Asiedu Botwe II, who made the call, said the insults being directed at political opponents by the youth on the airwaves were not palatable and should therefore be stopped.

Nana Kobina Botwe expressed these sentiments when the Vice-President, Mr Kwesi Bekoe Amissah-Arthur, paid a courtesy call on him and his elders last Friday at his palace at Agona Swedru during the latter’s visit to the town.

The Vice-President was in the town to officially launch the Central Regional National Democratic Congress (NDC) campaign task force as well as launch the official campaign for the Agona West Constituency.

He stated that it was a worrying development in the country that young men and women who had not achieved much in life would defiantly launch scathing verbal attacks on distinguished political leaders which went a long way to dent their hard-earned reputation.

He charged the leadership of the political parties to call their youth groups to order during the electioneering, stating that “hurling mere insults on your opponents does not win votes neither does it show maturity”.

He noted that election was about competition of ideas and messages and that the youth should rather focus on selling the messages of their political parties to the electorate in order to win their hearts.