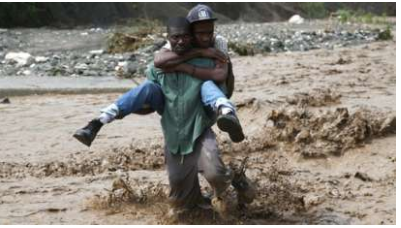 Rescue workers in Haiti are struggling to reach parts of the country cut off by the most powerful Caribbean hurricane in nearly a decade.

The destruction wrought by Hurricane Matthew has forced Haiti’s presidential election this weekend to be postponed, officials say.

Thousands have been displaced and at least 10 people have died.

The US states of Florida and South Carolina are bracing for the storm, which is nearing the Bahamas.

All air and sea traffic has been halted on the islands and people have been urged to move to higher ground.

Matthew is currently a Category Three storm, but is expected to strengthen to Category Four as it hits the US coast, the US National Hurricane Center said.

It battered a remote area of Haiti – one of the world’s poorest countries, with many residents living in flimsy housing in flood-prone areas – with winds of up to 230km/h (145mph) on Tuesday.

Officials said they were not yet in a position to gauge the true extent of the damage – particularly in the Grand Anse area on the southern tip of the island, which was directly in the storm’s path.

A key bridge has been destroyed, roads are impassable and phone communications are down, officials said.

Trees fallen, banana crops uprooted and flattened, houses under water and men and women trying to get the debris out of the way.

It was noticeable how the people we passed were coping alone. There were no army or police around to help. Even the aid agencies are struggling to move around this damaged corner of the country.

Mourad Wahba, the UN special representative for Haiti, said at least 10,000 people were in shelters and hospitals were overflowing.

“What we know is that many, many houses have been damaged,” Interior Minister Francois Anick Joseph said.

“Some lost rooftops and they’ll have to be replaced, while others were totally destroyed.”

Among the damaged buildings were schools and churches due to be used as polling stations in Haiti’s election. A new date for the much-delayed vote has not yet been announced.

At least 16 people are believed to have been killed by Hurricane Matthew so far, including four killed by collapsing walls and mudslides in the Dominican Republic.

In Cuba, dozens of homes in the eastern city of Baracoa were destroyed.

In the US, President Barack Obama warned that the coming days would be dangerous and urged Americans to heed official advice.

Residents in Florida are preparing for the storm’s predicted arrival

Florida Governor Rick Scott said his state could be facing its biggest evacuation ever.