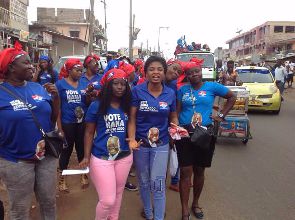 Young women campaigning for the New Patriotic Party (NPP) in the Eastern Region have been allegedly assaulted by some youths believed to be supporters of the governing National Democratic Congress (NDC).

The NPP Loyal Ladies were finishing off a campaign for the NPP Suhum Parliamentary candidate Tuesday when they were rounded up the thugs.

The NPP Loyal Ladies, some of whom are drawn from the party's student groups in tertiary institutions in Suhum embarked on a house to house campaign in groups.

After rounding up their campaign at Oforikrom in Suhum, they converged at 'Sokola' park where they were accosted by at least eight thugs, a leader of the NPP Loyal Ladies Vicentia told myjoyonline.com.

"We were very afraid" Vincentia who lives in Suhum said and identified four of the attackers - Musah, Asorba, Petti, Kwame Ansah.

According to her, the young men demanded to know who gave them permision to meet at the park and tried to take pictures with them to show to the MCE. A member of the group who is a student nurse, urinated on herself during the intimidating interrogations, she explained. Her phone was also stolen.

According to her, the NPP Loyal Ladies after the experience moved to the Suhum Palace to report to the chiefs. They had to wait at the palace because the chiefs were performing some rituals ahead of the Suhum Odwira festival.

" We were followed by the thugs to the palace" where a crowd had gathered, she said. Their attackers hurled stones hitting a bystander on the head. A taxi driver was also beaten up, she said.

Vicentia noted that although the police came to the scene after hearing reports, they declined to effect any arrest. "We don't do politics", Vicentia reported one of the police officers who was speaking to a chief. According to Maxwell Kudakor, the chiefs are unwilling to talk to the media about the incident.

Eastern regional police PRO ASP Yaw Nketia Yeboah told Joy News, they are investigating the incident. He said a police patrol team were at the palace but urged the ladies to officially report to the police station.

Before the incident happened Tuesday evening, the local council of churches and the chiefs in Suhum had met the various parliamentary candidates Tuesday morning to agree on a roadmap for peace.

It was agreed that any acts of politically motivated violence should be reported to the police and to the chiefs.

The religious and traditional rulers had grown concerned that Suhum is becoming a politically charged area as general elections fixed for December 7 beckons.

Two weeks ago, the NDC accepted responsibility for an attack on the office of the Electoral Commission in the area during a voter transfer exercise. The thugs threatened to torture the EC officials. They resisted some voters who had arrived in the constituency to transfer their votes.

Suhum is a constituency to watch in the 2016 general elections. Despite the seat being a traditional NPP seat, the NDC will feel encouraged by the decreasing margin of victory.

The current MP Frederick Opare–Ansah by 0.29%. He defeated the NDC candidate, Mr Julius Debrah, now the Chief of Staff at the Presidency by 388 votes.