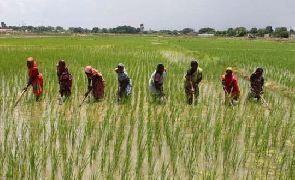 Ten countries (Benin, Cameroon, Côte d’Ivoire, Guinea, Kenya, Mali, Nigeria, Senegal, the United Republic of Tanzania and Uganda) met in a two-day technical workshop from 22 to 23 September 2016 to discuss the implementation of the “Partnership for Sustainable Rice Systems Development in Sub-Saharan Africa” project. This partnership with Venezuela and FAO strongly emphasizes the importance of sharing best practices among the participating African states and other countries.

At regional level, the project is consistent with the Africa Union’s Comprehensive Africa Agriculture Development Programme (CAADP) adopted by governments throughout the region and which aims to increase market access through improved rural infrastructure and facilitate regional trade in food staples.

At country level, the project is consistent with FAO Country Programme Frameworks (CPFs) and national rice policies. It will also include Civil Society Organizations, Farmer-Based Organizations (FBOs), public-private partnerships and development partners in an effort to harmonize regional efforts through joint activities.

Speaking at the opening ceremony, Bukar Tijani, FAO Assistant Director-General and Regional Representative for Africa, noted that the consumption of rice, a primary staple in Africa, is rising more than any other. Rice is a primary staple for food consumption, particularly in West Africa where its growing cities depend on rice as a cornerstone of the daily diet, and consumption is increasing by roughly 5.5% a year. However, despite the clear potential to boost regional production, most African countries continue to rely heavily on imports for meeting their growing rice consumption needs at an annual cost of USD 5 billion.

“Such a heavy reliance of most African countries on rice imports for their consumption continues to pose a serious food security concern, as rice consumption will jump to 130% by 2035,” Bukar Tijani said. “Research institutions have highlighted the potential role of high-yielding rice varieties as a solution to boost low crop productivity, targeting their increased use by smallholders.

In response, the African Union and the African Development Bank have recognized rice as a priority strategic food crop for the region as part of the Malabo agenda to eradicate hunger in Africa by 2025”, he added. Partnerships in action FAO is actively consolidating partnerships with regional and global development partners to support the transformation of Africa’s rice sector by boosting productivity, strengthening rice value chains and supporting improved coordination of regional markets.

Currently, FAO is also working with the Coalition for African Rice Development (CARD) led by the Japanese International Cooperation Agency, alongside Africa Rice, African Development Bank and others, to provide technical assistance to countries seeking to double rice production levels by 2018. Sidi Sanyang, Program leader in AfricaRice, said rice is the single most important source of dietary energy in West Africa and the third most important for sub-Saharan Africa (SSA) as a whole.

He observed that despite positive and rapid increase in rice production in Africa since 2007, local rice production is unable to keep pace with the increasing demand. Sanyang noted that the demand-supply gap is widening and underlined sustainable intensification of rice production, based on enhancing biological processes of the ecosystem.

This production model will be the foundation and the benefit of the entire business model and rice food chain. FAO is working with existing research and development partners with initiatives that are toward similar goals (CARD, AfricaRice, AfDB, AGRA and others), in order to promote more efficient, sustainable and productive rice production systems in Africa.

The project implementation will address efficient rice production systems for Africa, supported through the promotion and adoption of best practices and up scaling of proven and tested technologies. In addition to the support of the development and promotion of policy options and effective institutions and markets, it will also cover the development of agribusiness models along the rice value chain for increased production and productivity, including reduction of post-harvest losses and improved grain quality.

Other areas are irrigated and integrated rice systems to ensure sustainable increased production and productivity in the major rice production environments. Views Bibiana Walela is Assistant-Director, Ministry of Agriculture, Livestock and Fisheries in Kenya and project focal person. She said rice in Kenya records the highest per capita growth of 12 per cent among all cereals per annum due to government aggressive promotion of the cereal for food safety and income generation.

She indicated that the Government of Kenya also set a target of attaining rice sufficiency by 2030. The challenges in the areas include weak farmer institutions, new technologies and market accessibility. “We are optimistic that by this project, we are likely to bring on board all sector players to address the full value chain challenges, build business culture and entrepreneurship, as we look at policies affecting the industry and trade to ensure a level playing field.”

Gaya Blaise Koniono is FAO Administrative Assistant of the Project in Guinea. He said rice production in the country faces the challenge of proper application of modern farm technologies and equipment as well as market accessibility.

“This project will assist farmers by training them on the efficient storage of farm produce to mitigate post-harvest losses, and also promote locally produced rice against expensive imported food; we will ensure that we produce the best rice at a cheaper cost to the consumer”, he said.