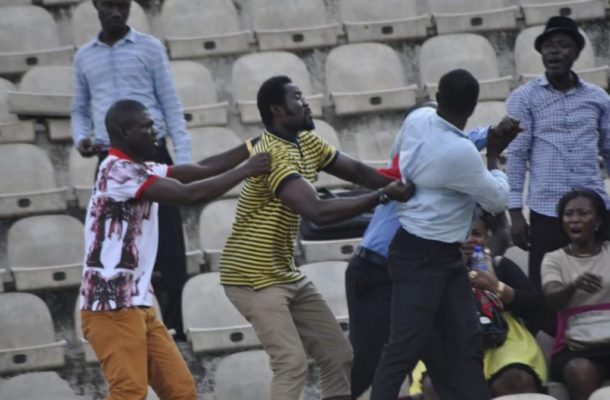 The Sports Writers Association of Ghana (SWAG) has condemned recent attacks on its members in the line of duty and bemoaned the general lack of decent working environment and protection for sports journalists while covering sporting events, particularly the Premier League.

In a press statement signed by the SWAG Vice-President, Maurice Quansah, recent acts of violence, threats and intimidation visited on its members have reached a point where the police, club officials and the sport’s regulatory bodies must act to guarantee the safety and security of accredited sports journalists while undertaking their lawful duties.

Last Sunday, a journalist of Kumasi-based Gem FM, Emmanuel Opoku, was brutally assaulted by some supporters of Kumasi Asante Kotoko while he was running live radio commentary on the Asante Kotoko-Dreams FC league match at the Baba Yara Stadium. The commentator was brutally assaulted only because he had cause to question a penalty kick awarded to Kotoko by referee Nathan Anafo. The supporters were enraged and subsequently visited violence on the journalist who sustained injuries in the processed and was later rushed to the hospital to receive treatment. Another journalist of Gem FM sustained serious leg injuries while fleeing the scene of the vicious attack on his colleague.

Only days earlier, a sports journalist of Happy FM, Samuel Addo, was assaulted at the Tema Stadium by a policeman while carrying out official duties during the Inter Allies-Asante Kotoko league match.

There have been other incidents involving some club officials who instigate attacks on some targeted sports journalists, obstruct them from carrying out their lawful work, or engage in acts of intimidation aimed at gagging them.

Such acts of lawlessness unleashed on sports journalists in the line of duty are unacceptable and must not be tolerated in any shape or form in our democratic dispensation, where the fundamental right of freedom of expression is guaranteed by Ghana’s Constitution.

SWAG therefore calls on the law enforcement agencies to ensure that such acts of violence at our stadia in particular, are dealt with according to law to serve as a deterrent to other like-minded supporters and club officials who use threats, intimidation and assault as a means of expressing their displeasure or gagging journalists.

SWAG believes that the work of sports journalists is not beyond scrutiny or criticism for either inaccuracies or even perceived bias. However, it is unacceptable for team officials and fans, or in some cases security personnel on duty, to resort to brute force and violence to vent their frustrations on their media partners. At the very least, there are prescribed and lawful ways of seeking redress for any shortcomings by the media.

As key partners in the development and promotion of sports, it is important that accredited sports journalists are granted the necessary access to sports facilities and a decent environment to carry out their duties without intimidation or threats.

SWAG notes with gratification that the management of Asante Kotoko has openly condemned the unwarranted assault on Emmanuel Owusu last Sunday, to disassociate the club from the act and also to send a strong message to its supporters that such acts are not acceptable.

It is important also that football clubs take steps to guarantee the safety and security of journalists who cover their events, as well as provide improved working environment for them.

SWAG recognises the importance of the work of sports journalists as strategic partners in the development and promotion of sports and will continue to empower its members through regular training programmes to ensure an improvement in their output.

However, if the upsurge in intimidation, threats and assault on journalists continues, individual media houses and SWAG as a body would have no other choice than to take decisive action regarding our future relationships with these team. The consequences of such a stance include, but not limited to, a boycott of these clubs and/or notorious match venues and a blackout of information on such bodies.

Finally, SWAG will urge regulatory bodies, such as the Ghana Football Association (GFA), the Premier League Board (PLB), Ghana League Clubs Association (GHALCA) and the Division One League Board, as well as other major stakeholders, to take steps to ensure safety of sports journalists, as well as provide better working environment in line with conscious efforts taken in recent times to improve their relations with the media.