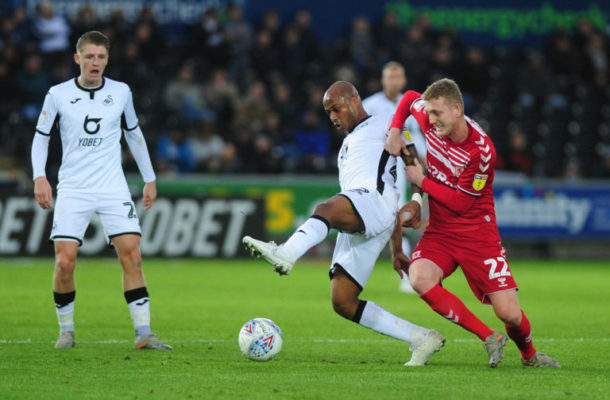 SWANSEA, WALES - DECEMBER 14: Andre Ayew of Swansea City vies for possession with George Saville of Middlesbrough during the Sky Bet Championship match between Swansea City and Middlesbrough at the Liberty Stadium on December 14, 2019 in Swansea, Wales. (Photo by Athena Pictures/Getty Images)

African football website GhanaSoccerNet have claimed that Leeds are eyeing a reunion between 30-year-old Ayew and Bielsa, after the two worked together at French club Marseille – before Swansea signed Ayew the first time.


The 86-time international is impressing at Swansea this season after returning to the club and failing to be transferred. He spent last season on loan at Turkish SuperLig side Fenerbahce, where he struggled, scoring only five goals in 38 outings.

This season, though, Ayew is fairing much better – scoring seven goals and adding four assists in 20 Championship fixtures. Asked about Leeds’ reported interest, Swansea boss Cooper said there had been no contact and is hopeful of keeping Ayew.

"There’s a lot of players excelling in the league at the moment and we’ve definitely got one in Andre so I’m sure he’ll be talked about and you’ll be asking me every time I sit here until the end of January.

He’s in fine form and he’s really enjoying his football and training here. We’re enjoying that and hopefully it’ll last for a longer time than January.”


The former West Ham United ace would blow Leeds’ wage structure apart, given he is still earning Premier League wages. With a contract until the summer of 2021, Leeds would also have to part with a transfer fee to land their man.
Owner Andrea Radrizzani did not spend any money in the summer – though Helder Costa will sign permanently next summer for £15million – in order to comply with Financial Fairplay rules. Pontus Jansson and Kemar Roofe were sold.

So Leeds would have to spend big if they were to net Ayew, who cost Swansea £18million.

But with Bielsa knowing the player and Ayew keen to return to the Premier League, a move to Elland Road is not completely out of the question.