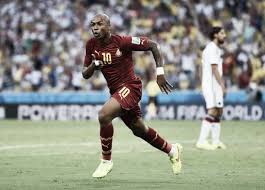 The two brothers, Ellis and Ioan Grriffiths who have made it a habit of keeping replica jerseys of their favourite Swansea City players seem to have taken the worst blow of Ayew's exit labelling their loyalty to the former Swansea City star "a curse".

Their father and long term Swansea fan says he has splashed more than £350 on replica jerseys for his boys but most of their favourite players leave just as the boys put in more loyalty for the players.

"I think we're cursed - you can put your shirt on any player the boys like leaving in no time at all." he said.

According to 42 year old Owen Grriffiths, the Ghanaian international autographed their jerseys only to leave the next day.

"After that it was Vorm - and then he was gone. And we bought a Bony top - and he was gone."

But Owen added: "We find the whole thing very funny.

"I try to persuade the boys to wait until after the transfer deadline but the new kits come out around school report time - and it is a reward for doing well in school."

Andre Ayew left Swansea City to West Ham United for a club record fee of £20.5M after becoming the club's top goalscorer of the season with 12 goals.

Names of the seven ex-Swans...and where they went:

Scott Sinclair - moved from Swansea to Man City in 2012.

Michel Vorm - left The Liberty Stadium for Tottenham in 2014.

Michu - the former Swans favourite moved to Napoli on loan.

Dorus de Vries - the Dutch keeper was snapped up by Wolves after four years with the Swans.

Bafetimbi Gomis - the Frenchman returned to his homeland with Marseilles earlier this summer.