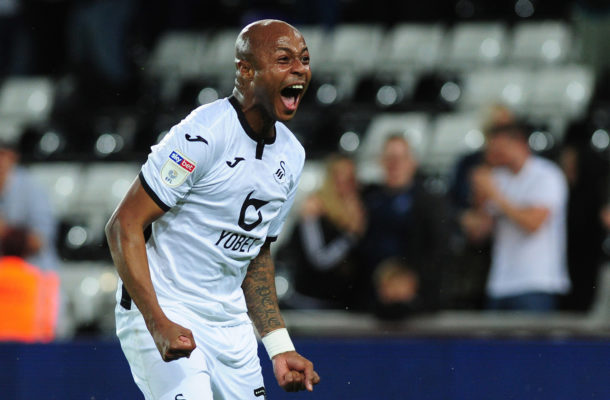 Swansea City chairman Trevor Birch has hailed the influence of  Andre Ayew, following his decision to stay at the club.

The Ghana forward spent last season on loan at Fenerbahce and had been expected to leave this summer.

The 29 year old said he had received offers from several clubs ahead of Monday's European transfer deadline but had opted to stay at the Liberty Stadium.

In a statement to fans, Birch said: "The two unexpected bonuses have been Borja Baston and Andre Ayew. To see them still part of our squad when the European transfer window closed last night was great news for everyone associated with the club.

"That last sentence is not one I thought I would be writing! But as we know, football is a funny old game and there are many twists and turns along the way and you must be flexible to adapt to the changing circumstances."

Trimming the wage bill has been one of the top priorities for Birch over the summer, and was the key reason many expected Baston and Ayew to be moved on this summer.

However, Birch says that while there is still further work to be done to get the club back on a strong financial footing, a couple of high-profile sales have eased the burden, allowing the club to change their stance on both players.

"Everyone was aware at the end of the season that we had to reduce our wage bill quite substantially to meet our financial targets, but the fact that we received decent fees for Dan and Oli gave us some flexibility on that front.

"With both Borja and Andre performing so well and expressing their desire to stay and fight for this football club, we are delighted with their commitment and that they are still part of Steve’s squad.

"They have both stated that they believe in what the club and Steve are doing and have bought into his ideas and plans.

"Andre has shown in his first few games back what a quality player he is. He has come back to the club with a great attitude and as an experienced member of the squad I think he has a big role to play in helping and supporting some of the younger players as the long season progresses”