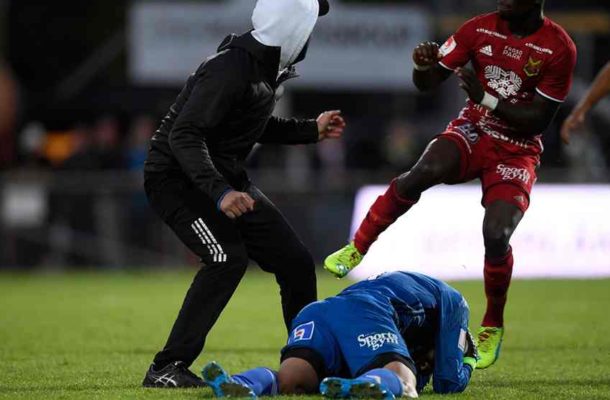 A top-flight match in Sweden had to be abandoned when the goalkeeper for Ostersund was attacked by a masked intruder.

Aly Keita was knocked to the ground by the unidentified man who was bundled away by players and stewards while the goalkeeper was given medical attention.

The game was called off with the match delegate Nicklas Bengtsson saying Keita was “not fit” to play on and the Ostersund coach Graham Potter, a former West Bromwich Albion player, adding: “Keita is shocked. He’s not doing so well.”

Keita later confirmed he had been struck in the temple, saying: “I am shocked and angry. It is awful that something like this could happen.”

 
The Ostersund goalkeeper is knocked to the floor.
He told Aftonbladet: “I just saw that someone was behind me. I ran and then stopped because I thought he was gone. Then I was in shock and didn’t understand what had happened. I didn’t hear him say anything. It is sad that someone can do something like that and ruin an evening. It is a sad day for football. But football is bigger than these idiots.

“I was a bit dizzy but now I am fine. I am going with the rest of the team to the hotel and go to bed. The police asked if I wanted to go to hospital but I don’t like hospitals.”

Police said a 17-year-old man had been arrested. “We have informed the prosecutor of the arrest and interviews will be conducted with him about the suspected breaches of the law.” The police also said that the 17-year-old told them that he had left a bomb in his bag but that proved to be untrue.

 
The masked man invades the pitch. Photograph: Mikael Fritzon/TT/EPA
Ostersund were drawing 1-1 at Jonkoping Sodra at the time. The Ostersund chairman Daniel Kindberg said: “This is terrible. Thank God the idiot didn’t have a knife. In a way I am actually relieved, the first thought that came to my head was: ‘Did he have a knife?’”
The Swedish Football Association said it would decide whether to record the game as a draw or whether the away team would be awarded a 3-0 victory which would happen if Jonkoping Sodra was found to have been at fault with their security measures.

It was the second time a game in the Swedish top flight had been abandoned this year. In April, Gothenburg’s match against Malmo was halted when a firework exploded at the feet of a substitute who was warming up.