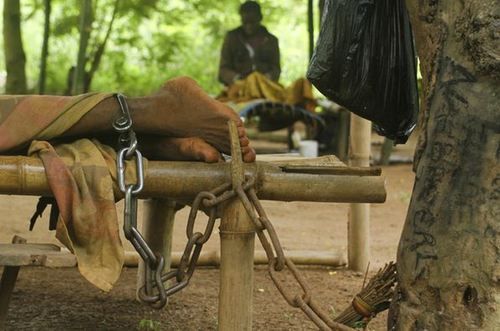 A Swiss photographer who witnessed "horrifying abuses" in some prayer camps in Ghana after visiting the country in 2011 has been compelled to document how people with mental illnesses are teated around the world.

Photographer, Scott Typaldos was motivated to begin thorough research on the treatment of mentally unstable people across the globe after seeing the plight of people with mental problems in a number of prayer camps in Ghana.

He witnessed horrifying abuses in the camps, including patients chained to trees and walls.

"Thousands of people with mental disabilities are forced to live in these institutions, often against their will and with little possibility of challenging their confinement," a 2012 Human Rights Watch report said, adding that the camps are usually run by self-proclaimed prophets and with little government oversight.

The experience compelled Typaldos to begin documenting how people with mental illnesses are treated around the world. His project is titled "Butterflies," and so far it includes four chapters. From Ghana, Togo, Kosovo and most recently, Indonesia.

Mr Typaldos is now working on a fifth in the Philippines.

"In their cages, enslaved by chains, past the other's indifferent abuse, apparent animals are holding onto a dying humanity," he said of what he saw in Indonesia. "Others are dreaming of freedom through the ingestion of a primal state. Everyone deeply estranged but so closely linked by a raw matter."

Typaldos explained how he came up with the title: "In Ancient Greece, drifting souls were often represented by butterfly symbols. This was a direct link to Psyche, the soul goddess, who was similarly depicted with delicate Lepidoptera wings."

"When looking for a title for my work on the mental condition, I wanted a word that elevated the individuals I had met above the stale, socially created traumas and stigmatizations, which had ruined their lives," he said. "The word 'butterflies' soon imposed itself as an image of a delicate but radiant state of being. A description of freedom constantly terrorized by the outside world and an unstable condition made splittable by a misplaced caress."
Ghana ratified the Convention on the Rights of Persons with Disabilities in July 2012.

The Convention sought to ensure that people with mental disabilities can make important life decisions for themselves, including choosing their place of residence and with whom they live, and that they are not forced to live in institutions.

In June 2012 Ghana enacted Mental Health Act which creates a system for people with disabilities to challenge their detention in psychiatric hospitals.

But the law does not apply to prayer camps, leaving residents without legal remedies to seek release.