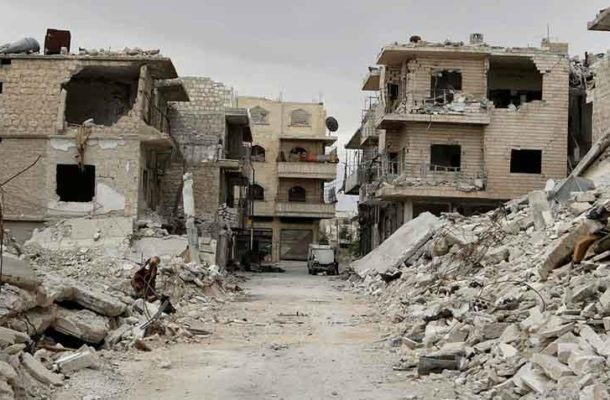 A ceasefire in Syria brokered by the United States and Russia began at sundown on Monday across the country, coinciding with the Muslim Eid al-Adha holiday, but there are concerns about whether it will hold.

The deal, agreed to on Friday by US Secretary of State John Kerry and Russian Foreign Minister Sergey Lavrov, aims at putting an end to fighting in Syria and moving towards a political transition after more than five years of war between forces loyal to President Bashar al-Assad and rebel groups fighting to depose him.

The truce does not apply to the Islamic State in Iraq and the Levant (ISIL) or Jabhat Fateh al-Sham, the group formerly known as al-Nusra Front that changed its name after cutting ties with al-Qaedain July.

- During that time, the Syrian government is to refrain from flying "combat missions anywhere where the opposition is present in an area that we have agreed on with very real specificity", US Secretary of State John Kerry said.

- Left unclear is whether those areas include places that are held jointly by rebels and Jabhat Fateh al-Sham, Al-Qaeda\'s former ally.

- If the truce holds for one week, the US and Russia "would then work together to develop military strikes against" Jabhat Fateh al-Sham.

- Deal requires both sides to "halt all attacks, including aerial bombardments and any attempts to gain additional territory at the expense of the parties to the cessation", Kerry said.

- "It requires unimpeded and sustained humanitarian access to all of the besieged and the hard-to-reach areas, including Aleppo" city, with both sides pulling back from two key access routes running from the north and south into the divided city.

- Any violations would be dealt with "based on the original truce agreement" reached in late February, which created a joint US-Russian monitoring mechanism, according to US special envoy for Syria Michael Ratney.

- From Monday, the US and Russia will create a Joint Implementation Centre for the "sharing of information necessary for the delineation of territories controlled by (Jabhat Fateh al-Sham) and opposition groups in the area of active hostilities".

- "After seven continuous days of adherence to the cessation of hostilities and increased humanitarian access, then US and Russian experts will work together to defeat" Jabhat Fateh al-Sham and ISIL, Kerry said.

- These measures can only be implemented if "groups within the legitimate opposition... distance themselves in every way possible from" Jabhat Fateh al-Sham and ISIL, he said.

- According to Lavrov, coordinated strikes against the jihadists will be carried out by US and Russian planes in specific areas. "The Syrian air forces will be functional in other areas," he said, without specifying where.


The Syrian government, as well as Iran and the Lebanese Hezbollah armed group, two of its strongest allies, have all agreed to the deal.

Yet, just hours before Monday's truce was set to begin, Syria's main opposition group and several rebel factions called for "guarantees" on the implementation of the ceasefire before fully endorsing it.

"We want to know what the guarantees are," said Salem al-Muslet, spokesman for the High Negotiations Committee, Syria's main opposition bloc.

"What is the definition that has been chosen for 'terrorism', and what will the response be in case of violations?" Muslet told AFP.

The Free Syrian Army (FSA), a leading rebel alliance, said over the weekend that it would observe the truce, but had major reservations.

The alliance wrote to Washington on Sunday, saying that while it would "cooperate positively", it was also concerned that the deal would benefit the government of President Bashar al-Assad.

In a statement, the deputy commander of the group said that the ceasefire would only serve to "reinforce" the Assad government and "increase the suffering" of civilians.

Main rebel factions were expected to make a major announcement on Monday, accepting the deal but blasting it as playing into the hands of Assad.


Just hours before the truce began, Assad said his government would take back all the land held by "terrorists" and rebuild the country.

After performing prayers for the Muslim Eid al-Adha holiday in the Damascus suburb of Daraya, once the heart of the uprising against the government and only recently surrendered by rebels, Assad vowed to "retake every inch of Syria from the terrorists".

In the lead-up to the sundown deadline, government air strikes hit rebel-held areas of Aleppo and Idlib on Monday, while Ahrar al-Sham pushed forward in a heavy offensive against pro-government forces in Quneitra in the country's southwest.

"On the ground, what you see is more violence, more fighting and more air strikes," Al Jazeera's Hasham Ahelbarra, reporting from Gaziantep on the Turkish side of the Syria-Turkey border, said.

Senior members saiid that they were "sidelined" by the deal  and had "no guarantees about what will happen in the future, and that there is no indication about Assad stepping aside in the future," our correspondent reported.

Rebel commanders were also very concerned about the "targetting of the Nusra Front, which is a crucial component for the opposition in northern Syria," said Ahelbarra.

Alongside Ahrar al-Sham and other local factions, the group formerly known as Nusra forms the core of the Army of Conquest, which is credited for capturing the province of Idlib and breaking the siege on Aleppo.

In a letter sent to Syrian rebels ahead of the ceasefire, US State Department envoy Michael Ratney urged armed opposition groups to distance themselves from Jabhat Fateh al-Sham, or there would be "severe consequences".

According to the deal, aid access to the country's many besieged and "hard-to-reach" areas is set to begin immediately, with government and rebel forces ensuring unimpeded humanitarian access, in particular to Aleppo city.

Questions remain, however, about how the ceasefire will apply in several parts of the country where Jabhat Fateh al-Sham is present.

If the ceasefire holds, the deal says that Washington and Moscow will begin joint targeting against hardline groups, including Jabhat Fateh al-Sham, in a week.


But the former al-Qaeda ally is a powerful partner for many opposition factions on the ground, and a rebel letter to the US over the weekend warned of repercussions if the group was targeted.

Striking Jabhat Fateh al-Sham, the rebels said, "will spark anger that will be directed towards us and be another factor in the failure of the ceasefire".

The letter, sent by FSA-related groups to the US on Sunday, outlined "concerns" over the deal.

In the text seen by AFP, rebels wrote they would "deal positively with the idea of the ceasefire," but did not explicitly back it.

"The clauses of the agreement that have been shared with us do not include any clear guarantees or monitoring mechanisms ... or repercussions if there are truce violations," they said.

Ahmad al-Saoud, who heads the US-backed Division 13 rebel group, a signatory of the letter, said they had received no response to their concerns.