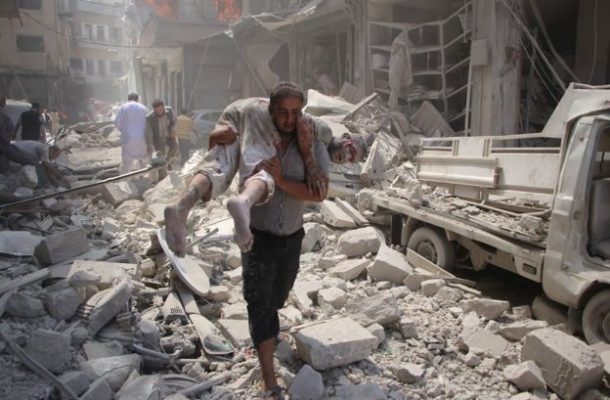 An air strike on a market in the rebel-held Syrian city of Idlib killed at least 20 people hours after the US and Russia announced plans for a truce.
As many as 90 people were also injured, media and opposition activists said, when a busy vegetable market was targeted by unidentified aircraft.

A 10-day truce is meant to start on Monday, followed by co-ordinated air strikes against jihadist militants.

Turkey and the EU welcomed the plan but warned that further action was needed.

Turkey said aid must be delivered from the very start while EU foreign policy chief Federica Mogherini looked towards a "political transition".

A spokeswoman for Syria's opposition said the plan provided some hope but more details were needed about how it would be enforced.

In the Syrian capital Damascus, the government endorsed the deal, the state news agency Sana reported.

There has been no official reaction from Iran which, like Russia, is allied to Syrian President Bashar al-Assad.

The conflict in Syria, which began with an uprising against Mr Assad, has raged for five years and claimed the lives of more than a quarter of a million people.

Millions have fled abroad, many of them seeking asylum in the EU, but nearly 18 million people remain in Syria, which has been carved up by fighting between government and rebel forces.

In other fighting on Saturday:

Getting a deal was an achievement, given the sour atmosphere between Moscow and Washington. It offers some fragile hope about stopping the slaughter.

But there is scepticism about its chances. That is because a lot is going to have to go right, quite quickly, if the agreement is to work. One necessity is President Assad's consent. A week-long ceasefire might be possible, but a political deal to end the war is still out of sight.

The Assad regime's survival depends on the Russians, so he will listen to them. But with Russia's help, the Assad regime is looking more robust. So it is hard to see why the president, or his Russian allies, would want him to go.

The war in Syria is made up of layers of conflict, which connect up to regional and global rivalries. That makes it very hard to calm, let alone end.

The truce is due to take hold at sunset on Monday, at the start of the Muslim holiday of Eid al-Adha.

In an unexpected development, Russia and the US will then establish a joint centre to combat jihadist groups.

These include IS but also Jabhat Fateh al-Sham, the group known until recently as the Nusra Front, when it was allied to al-Qaeda.

The deal was reached in Geneva, Switzerland, between US Secretary of State John Kerry and his Russian counterpart, Sergei Lavrov.

If the truce holds...

Moderate rebels and civilians in the areas they hold will no longer face the threat of indiscriminate air strikes such as barrel-bombing although the Syrian air force will not be grounded completely; aid deliveries will be allowed to areas currently under siege

Mr Lavrov said only the Russian and US air forces would operate in areas designated for co-ordinated strikes but added that the Syrian air force could operate in other areas.

Welcoming the deal, Turkey, which launched its first major military incursion into Syria last month, said it was essential to halt fighting across Syria and deliver humanitarian aid to those in need "from the first day".

"The agreement... is very welcome," said Ms Mogherini, stressing that a UN proposal for a political transition would be "the starting point for resumption of the intra-Syrian talks".

Previous diplomatic initiatives have foundered on President Assad's refusal to give up power, leading to widespread scepticism about the latest initiative.


September 2013: Kerry and Lavrov negotiate a deal to strip the Syrian government of its chemical weapons in return for the US backing away from air strikes. Since then, the government has again and repeatedly been accused of using toxic chemicals against rebel-held areas


February 2016: World powers agree in Munich on a nationwide "cessation of hostilities" in Syria excluding jihadist groups. There is no agreement on any joint US-Russian operations. The "pause" quickly unravels as Assad promises to regain control of the whole country