Barely a week ago the chief of Tamale Dakpema, Naa Bawa Fuseini, ordered the public caning and fining as punishment for two young love birds for making and circulating pornographic content in his traditional jurisdiction.

The act which was a public spectacle was captured on video and circulated on social media prompting the criminal investigation department (CID) to invite the Tamale overlord for questioning.

This move by the CID has incurred the wrath of a youth group calling itself the Dagbong Youth for Development (DYD).

According to the group the decision by the police is an affront to tradition since what the chief did is within his jurisdiction.

They are therefore calling for the immediate removal or transfer of the head of northern regional crime officer, Supt. Otuo Acheampong, over what they term an absolute disrespect to the chiefs, elders and people of Tamale.

The youth group has appealed to the Dakpema Naa and his royal court to refuse the invitation from the police since its spiteful,disrespectful and sheer display of arrogance and ignorance of traditions. 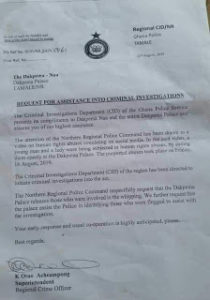