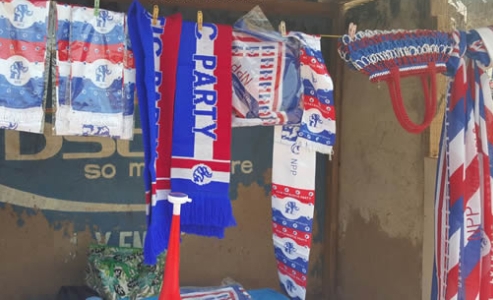 Hundreds of the New Patriotic Party (NPP) supporters and some constituency executives in the Tatale constituency are pressurizing the incumbent Member of Parliament, Cecil Yaawube to contest the upcoming Parliamentary election as an independent candidate. Yaawube who won the 2012 Parliamentary election lost the NPP’s Parliamentary primary to Thomas Nbomba. Thomas Nbomba also a new entrant polled 154 votes to defeat Hon. Yaawube, who polled 111 votes at the primary. But majority of NPP supporters, financiers and some constituency executives are threatening to vote skirt and blouse at the 2016 polls if their preferred candidate, Cecil James Yaawube does not contest as an independent candidate. A group called the Friends of Yaawube group on Wednesday organized a demonstration in Tatale. They held placards with inscriptions such as “No Yaawube, no vote,” ‘Accept our offer or don’t come here again,” “women are crying for you” and “Yaawube come and complete your stalled projects” among others. The group’s Secretary, Kpante Wilfred Npong told Citi News Hon. Cecil Yaawube remained the people’s obvious choice for the 2016 Parliamentary election. He disclosed the group’s intention to banish Hon. Cecil Yaawube from the constituency if he turns down their request.
He served notice the group’s members will vote skirt and blouse at the 2016 polls if Hon. Cecil Yaawube fails to contest the Parliamentary election as an independent candidate.

Wilfred Npong commended the MP for the numerous developmental projects he has so far executed in the area.
He thus impressed upon Hon. Thomas Nbomba to retain his seat as an independent candidate and accomplish his unfinished agenda.

Wilfred Npong said the group was solidly behind the NPP Presidential nominee, Nana Addo Dankwa Akufo Addo.
He insinuated that the NPP 2016 Parliamentary candidate, Thomas Nbomba is an NDC mole.

He claimed with Thomas Nbomba, the NPP has no future in the Tatale constituency and further accused Thomas Nbomba of dividing the NPP fraternity there on tribal lines.

As an orphan constituency, it was carved out of the Zabzugu/Tatale constituency in 2012 with Hon. Cecil Yaawube as the first MP.