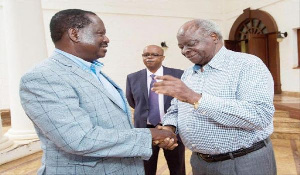 Taxpayers have forked out over Sh5 billion in the last five years for pensions, staff salaries, office space and other benefits for retired presidents and vice presidents.

An analysis of budget records shows the government has been spending at least Sh1 billion annually for the upkeep of retired VIPs.

The amount will rise significantly by a billion starting the next financial year after more VIPs were brought on board to start earning hefty perks as retirement benefits.

Kenyatta’s office received about Sh498.2 million during the financial year ending June while the benefits of former President Moi were frozen following his demise.

Opposition chief Raila Odinga who served as prime minister in the Grand Coalition Government between 2008-2013 will be having all his expenses catered for by taxpayers.

Payment of gratuity and other benefits to Raila and Kalonzo had been frozen by the Jubilee government to force them to retire from active politics.

The law entitles ex-presidents a hefty monthly pension equivalent to 80 per cent of the salary paid to the sitting President, a fleet of luxury cars replaceable after four years, a fully-furnished office and about 40 workers.

But Ndung'u Wainaina, executive director of the International Center for Policy and Conflict, argues that the upkeep is illegal.

"The law should be changed to ensure that they individually contribute to the scheme. It should be mandatory," said Wainana.

Taxpayers currently pay for workers in Kibaki’s Nairobi office, bought for Sh250 million in 2014, and Moi’s office at Kabarnet Gardens off Ngong Road.

Kibaki has been particularly criticised for signing into law the Presidential Retirement Benefits (Amendment) Bill of 2012 that entitled him to generous retirement perks including a retirement home in Mweiga, Nyeri county.

The Sh400 million home is built on a 100-acre piece of land that is part of the 1,000-acre ranch belonging to Sasini Mweiga estate.

At the time Kibaki assented to the controversial Bill that attracted a groundswell of condemnation he, however, rejected a separate Bill that could have awarded the Prime Minister, Vice President, Chief Justice and other state officers hefty send-off perks.

This forced the Kenya National Commission on Human Rights to move to court arguing that during the reading and passage of the law, Parliament did not involve the Salaries and Remuneration Commission.

The SRC is the agency with the constitutional mandate to fix salaries, allowances and retirement benefits of all state officers.

The commission said Kibaki should have refused to sign the law to adhere to good governance practices and constitutionalism.

“In enforcing the law, Mr Kibaki and Parliament went against the spirit of the Constitution, which intended to stop MPs and other State officers from arbitrarily increasing their salaries without minding the status of the economy,” the commission argued then.

The High Court in 2015 stopped the government from paying allowances to the former presidents after finding that they were an unnecessary expense.

The Attorney General successfully appealed the decision, allowing the two to continue enjoying their retirement emoluments.

There are also concerns that MPs might seek to amend the Presidential Retirement Benefits (Amendment) Bill of 2012 to award President Kenyatta hefty perks when his term ends in 2022.

Speculation is rife that the perks currently enjoyed by Kibaki will be enhanced in accordance with the inflation rate to award Uhuru a lucrative retirement package, at a time the country is grappling with a bloated wage bill.

However, there have not been any pragmatic steps by MPs to table a Bill although there is a window to ensure that the perks are factored in the budget preceding the 2022 General Election.

“It does not make sense for taxpayers to make former presidents' life more comfortable while they have nothing to look forward to in return,” said Martin Napisa, former National Taxpayers Association coordinator.

Napisa reckons that much as former heads of state are entitled to a good life after retirement, the figures have become “ridiculously” high, a huge chunk of which could be channelled towards upgrading Kenya’s rickety schools and hospitals.

“It is nothing less than a rip-off,” he said, pointing to the billions of shillings spent annually on elected and nominated leaders’ salaries and allowances.

In the revised budget by Treasury Cabinet Secretary Ukur Yatani, Kibaki is set to get Sh143 million which includes a personal allowance of Sh31.2 million.

Kibaki has been allocated Sh34.4 million for monthly pension, Sh18 million for insurance cover and Sh11.7 million for vehicle purchase.

The former President has been allocated Sh44 million for employee wages as well as Sh3.2 million for local and foreign trips.

Awori has been allocated Sh44.5 million— a reduction of Sh10 million from what he got last year.

Raila and Kalonzo were to get Sh1.5 billion gratuity but it was removed in budget cuts to raise money for Covid-19 emergency response.

The payment has been staggered for the next three financial years with Sh450 million projected for 2022 and Sh600 million for the fiscal year ending 2023.

Fearing leaders' appetite to cling to power, Parliament passed the generous package as an incentive for politicians to leave office voluntarily in the knowledge that their comfort was assured.

The package has also come under heavy criticism on grounds that the retired presidents left office as rich men with property worth billions of shillings and vast business interests.

However, while Moi and Kibaki have been enjoying retirement perks, Raila and Kalonzo have not been benefiting, a situation that would radically change with the handshake.

The ODM leader and his Wiper counterpart Kalonzo will get a plum share of a proposed Sh785 million budget for retired state officers.

The two leaders have been allocated Sh200 million each in gratuity. The state has also granted the duo annual pensions of Sh25 million each, translating to about Sh2 million per month.

Should MPs approve the estimates published by Treasury CS Yatani, the two will also have part of their expenses paid for by taxpayers at Sh72 million each.

Treasury records show that Kalonzo received Sh72 million this year for employee wages and insurance, among other provisions.

Of this, Sh26 million was for the purchase of vehicles; Sh10 million office furniture; Sh4.3 million for vehicle maintenance; and Sh1.5 million fuel.

In 2015, Uhuru wrote a memo to Parliament that Raila and Kalonzo should not benefit since they were still active in politics.

In 2016 Cord (Raila's political coalition) went to court to challenge the memo and the High Court declared the amendment unconstitutional and discriminatory.

The allocations may settle Raila and Kalonzo's long-time push to get the benefits.