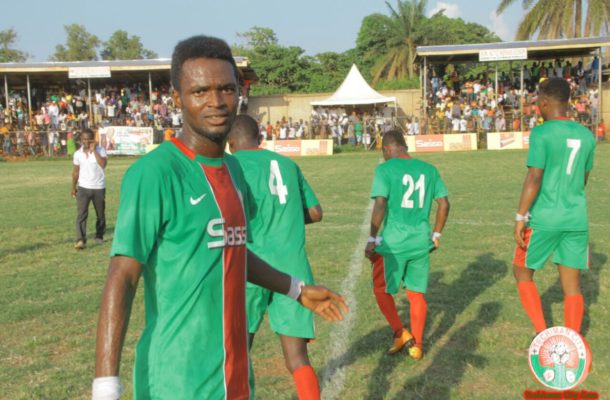 Sekondi Hasacas' last faint hopes of staying in the Premier League  slipped through their fingers on wednesday afternoon when a brace from Fatahu Abdul Rahman bid a painful goodbye  to the Western Giants.

City winger Fatawu  nabbed the fastest goal under 1min and completed his brace in 85th minute.

The sekondi lads seemed to be controlling the game as they needed no rocket scientist to tell them of the consequences should they lose.

In the presence  of their home crowd, Techiman city this time around were just looking for the three points to ensure their stay in the premier league.

By the end, it was a sobering reminder to  Hasacass of where they were some three seasons ago-division one.

The Techiman club had generally toiled without reward as the defends men of hasaacas remained resoulte till the magic moment of Fatahu broke the deadlock
With his goals, Techiman city stands a better chance of claiming a stay im the premier league should they win their last match.

Techima city were  filled with energy   knowing that a win over hasacas would move them to within three points above the relegation zone.