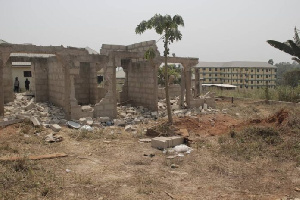 A photo of one of the demolished buildings

There is uneasy calm between some landowners at Akyem Osiem and the Saviour Church of Ghana following demolishing of some buildings by the Church.

Saviour Church of Ghana has for the past years been embarking on infrastructural expansion particularly for Saviour Senior High School.

However, portions of the surrounding lands belong to private developers some of whom were putting up buildings.

The Church, according to residents do not properly negotiate with landlords reluctant to give out their land.

The latest victim is Regina Opoku, a landlady putting up a six-room apartment which was about 60% complete.

“Some men from the saviour Church stormed the land in a car and ordered me to stop work. But I told them I just a caretaker working for someone so can’t stop work so they should speak to the landlady. The following day when I came around it is like a missile has been launched to the building. Everything has been demolished. They took the law into their own hands. The landowner has documents to the title of the land bought 25 years ago. It was then a farmland,” Kwaku Opoku Akosah, a brother to the landlady lamented.

He added “They told us they need the land so we should give it to them. We declined. The case went to Tafo Police station but they never showed up. They later came with injunction order which the landlady was not available to be served only for them to demolish the building. They did same to some owners here and went to put up substandard buildings with substandard building materials but because the person can’t fight them she is bitter. As a country we should not wait for violence to occur before we spend huge monies on to resolve whiles it can be resolved at the early stages”.

Attempt to get a reaction from the Saviour Church proved futile with an excuse that the matter is before a court.