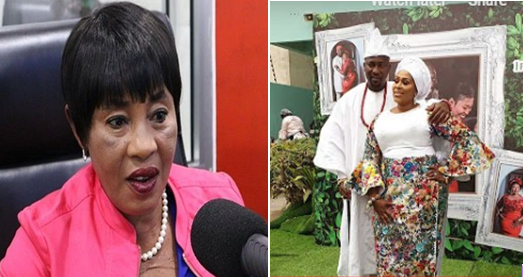 Things are getting dirtier after the ‘political marriage’ between Deputy MASLOC boss and staunch NPP member, Maame Afia Akoto, and the Deputy National Organiser of the NDC, Chief Biney Hamilton.

The timing, according to some NDC members is wrong, considering the fact that a major general election is just ten months away.

NPP’s Bono Regional Chairman, Kwame Baffoe alias Abronye DC who disagrees with members of the NDC that Chief Biney’s marital union with Maame Afia Akoto was wrong, explained that NDC men will at any day fall for the ladies in NPP because “NDC women are pickpockets” – to wit, they are criminals.

Abronye's claim did not go down well with the former First National Vice-chairperson of the NDC who charged at all the men in the ruling party.

Madam Anita DeSoso in an interview with NEAT FM’s morning show ‘Ghana Montie’ described the men in the ruling party as lacking in physical stature; in other words, ‘dwarfs’ – and the reason why their women ‘chase’ men in the NDC.

“We have sexy ladies and cute men in NDC that is why the NPP always come to us when they want to marry. We have thick tall and presentable men in NDC . . . NDC men are not short like their counterparts in the NPP. That is why Afia Akoto chose Chief Biney,” she said.

Listen to the interview below . . .