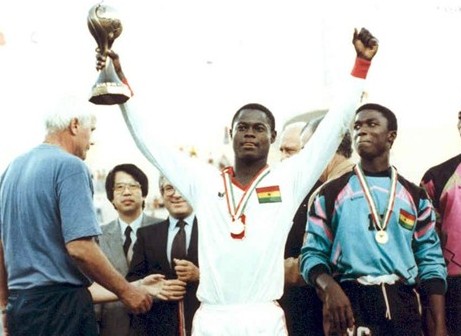 Former Ghana International Nii Odartey Lamptey was tipped for stardom in his formative years when he broke on to the scene the the national U-17 team.

Odartey Lamptey was the star of the Black Starlets squad that won the World U-17 Championship in Italy in 1991.

But as if by fate or design Odartey Lamptey never lived up to the hype and the height he was expected to reach.

The former Black Stars player was branded as the next Brazilian legend Edson Arantes do Nascimento 'Pele' but he was nowhere near the pele levels during his prime and  says the next Pele tag haunted him a lot as it placed a lot of pressure on him.

“I must admit Pele’s tag gave me a lot of pressure but well it was a great honor but as I said when you are going to any team at that time, a lot was on my shoulders,' he told Starr FM.

“It just wasn’t easy to be the next Pele within a year or two,” Odartey added.

The 45 year old journeyman played for numerous clubs in Europe including Aston Villa,PSV, Anderlecht before ultimately playing for Kotoko before hanging up his boots.

He was capped 38 times by Ghana scoring 8 goals in a career that lasted more than 20 years.