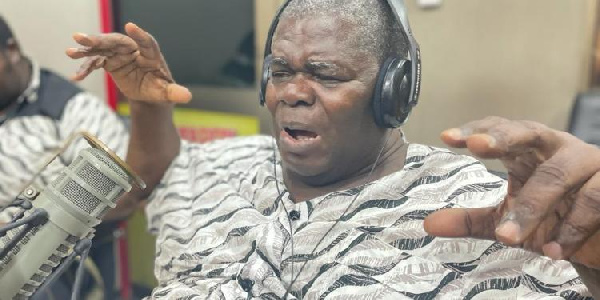 Veteran actor, Psalm Adjeteyfio, known popularly as TT for his role in the popular TV series ‘Taxi Driver’ has stated that the showbiz business or industry is demonic.

According to him, the devil himself is in the showbiz industry but it is also easy to be in it and be spiritually connected to God.

In an interview on the Happy Morning Show with Samuel Eshun, the veteran actor asserted that it is not rocket science to realize that the industry is fully demonic.

“It is easy to be in the Showbiz industry and know God but unfortunately the Showbiz business I should say is satanic because the devil himself is in Showbiz if you watch foreign movies and artistes you see their lifestyle, how they tattoo their bodies and how they live, you will realize that it’s demonic.

"Look at their appearances straight away you don’t need anybody to tell you this person is under the influence of Satan.”

Advising the young players in the industry, TT said “they need to fear the Father Almighty as I kept saying. You could be in this industry and still fear the father all mighty, it will make u a better person or artiste.

TT has also been detailing how he spent the GH¢50,000 donations Vice President Dr. Mahamudu Bawumia gave him last year.

TT has been in the media following the latest plea in leaked audio in which the actor is heard begging for leftover food from the kitchen of media personality, MzGee.

In the said audio, the actor indicated that he has invested the GH¢50,000 the Vice President gave him and that since the Vice President’s donation was made public, all those who used to help him withdrew which has created a lot of problems for him.

“MzGee good afternoon, I’m wondering if you would have some leftovers in your kitchen to spare. [The] reason is, people who use to help have all withdrawn their help when they heard that the Vice President had given me the money.

"But you would agree with me that [with] such monies, you need to invest wisely and that is what I have done and when you make investments too, it will take time before you begin enjoying it,” the Taxi Driver TV series actor explained in the audio.

“Right now, the situation has created a lot of problems for me; you know, a lot of people use to help me a lot but now everybody…I even understood that some people contributed some money in States to be sent to me; the moment they heard [that the Vice President had given me the money] everybody went for his money,” Psalm Adjeteyfio added.