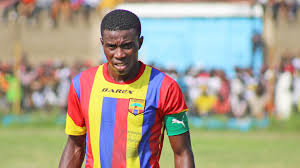 Former Hearts of Oak captain Thomas Abbey says he will not turn down the chance to play for his old club If the management of the club should make any approach for his services.

The former skipper was a key player for the rainbow club in the 2017/2018 season before leaving for pastures anew as a free agent.

Abbey joined Hearts of Oak in 2010 but initially struggled to settle but was able to find his feet at the club some years later rising to become captain of the team.

The former fans favourite who went on a sojourn in Malaysia is now a free agent after being left left go by his side PKNP F.C .

The second transfer window has officially been opened despite the fact that football has been suspended in the country due to the novel coronavirus pandemic.

“I am a free agent now and ready to sign for hearts of oak if only they give me good offer, why not, football is my job”

“If only they will sit down with me and offer me something good I will sign for them.”  He told Angel TV in an interview.

The phobians are currently looking at players to fortify their squad after somewhat having a topsy turvy campaign so far.