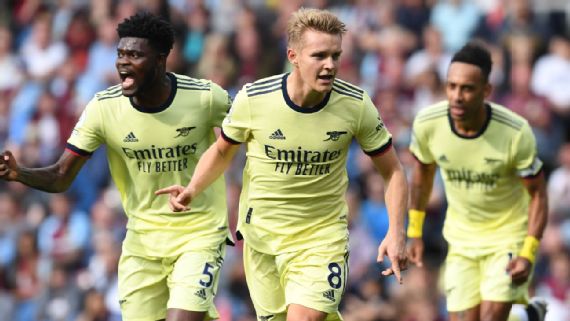 The expectation that comes with a £50 million transfer is that Ben White will improve Arsenal's defence by his mere presence, but in the 1-0 win at Burnley, that achievement was chiefly the preserve of his centre-back partner Gabriel.

Burnley made this a test typical of any trip to Turf Moor: combative, direct and awkward. It was a vote of confidence in White and Gabriel that Gunners boss Mikel Arteta opted for a back four with Thomas Partey a sole midfield pivot in a 4-3-3 shape.

Just five days earlier, Rafael Benitez had opted to deploy Everton with a three-man defence to counter Burnley's long-ball approach, and Arteta could easily have followed suit given his previous penchant for protecting his team in such a manner. But his faith in Gabriel in particular was rewarded, ensuring Martin Odegaard's superb 30th-minute free kick settled a hard-fought contest that delivers back-to-back wins for Arsenal and genuine momentum ahead of next weekend's north London derby.

One superb challenge to deny Ashley Barnes just before half-time was the highlight of Gabriel's three tackles, eight clearances, two blocks and ten successful aerial duels -- more than anyone else for either team -- on an afternoon of defiance as Arsenal passed a physical test they have so often failed in the past.

"We know he is a player with an incredible future," Arteta said of Gabriel, the Brazilian making only his 24th Premier League start after arriving a year ago from Lille in a £27m deal. "He has adapted really well to the league, that's why we signed him. He understands what we want. It does not get much harder than playing here in the Premier League. I thought he was terrific today."

Successive wins against Norwich City and Burnley are modest beginnings -- in East Anglia, Norwich lost their 15th consecutive Premier League game, against Watford, as the same time Arsenal edged past a Burnley team with one point and three goals to show for their seasonal efforts -- but the durability the Gunners showed here will breed confidence.

White competed reasonably well in the air but looked shaky at times, none more so than when underhitting a backpass midway through the second half that almost cost the visitors dearly. Goalkeeper Aaron Ramsdale rushed out to meet substitute Matej Vydra and got the barest of touches on the ball before bringing down the Burnley forward. Referee Anthony Taylor awarded the penalty but overturned his decision after being encouraged to look again by VAR Lee Mason.

Games can turn on such fine margins, but Ramsdale deserved his clean sheet for a composed afternoon in which he commanded his box well and maintained a presence his rival Bernd Leno has not always equalled. There was some surprise when Ramsdale was selected ahead of Leno against Norwich last weekend but he justified that decision here, and while there isn't much between the two on current evidence, the £32m summer signing from Sheffield United will be a hard man to dislodge if he maintains this promising start.

Arteta is under external pressure after a poor start to the season, but that is not yet reflected internally on the basis that we are yet to see the Spaniard's reformed lineup bed in and show their best.

They were more functional than fluid here but Partey's importance to Arteta's vision for the future was underlined in his selection. Granit Xhaka's suspension may well have been a factor but utilising Partey -- who made his first start of the campaign following an ankle injury -- as the lone defensive midfielder allowed him to accommodate Odegaard, Emile Smith Rowe, Bukayo Saka, Pierre-Emerick Aubameyang and Nicolas Pepe in the same team.

"He is really important because he is the anchor," Arteta said of Partey. "He is the one who has to read what is happening and has to make the rest better.

"That's his biggest job, to get the right balance in the team, to get the right rhythm in the team in attack, how you manage the transitions is top. He has a personality, a charisma and then he struggled at the end. He was cramping and that will come -- he has missed a long time and he needs some fitness back."

They might not yet be delivering the attacking cohesion Arteta would hope for, but having so many attacking players on the pitch heightens the chances of individual brilliance, and that was ultimately what won Arsenal the game.

Saka drove infield and was clipped by Ashley Westwood, giving Arsenal a free kick in a central position 25 yards out. Burnley goalkeeper Nick Pope gave Odegaard the left half of the goal to aim at if he could carve out a path over the wall, and the Norway international did just that, scoring his first goal since joining on a permanent basis from Real Madrid in a deal worth around £34m.

Saka drove infield and was clipped by Ashley Westwood, giving Arsenal a free kick in a central position 25 yards out. Burnley goalkeeper Nick Pope gave Odegaard the left half of the goal to aim at if he could carve out a path over the wall, and the Norway international did just that, scoring his first goal since joining on a permanent basis from Real Madrid in a deal worth around £34m.

There were other dangerous moments. Saka and Aubameyang combined to feed Smith Rowe, who shot tamely at Pope before Pepe wasted a golden chance to play Aubameyang through on goal.

As against Norwich, though, this was an afternoon in which the result took priority over the performance -- and Arsenal ground it out in atypical fashion.

"We have players who are not at their strength playing in this type of game," added Arteta. "But they did their best and we got the win."