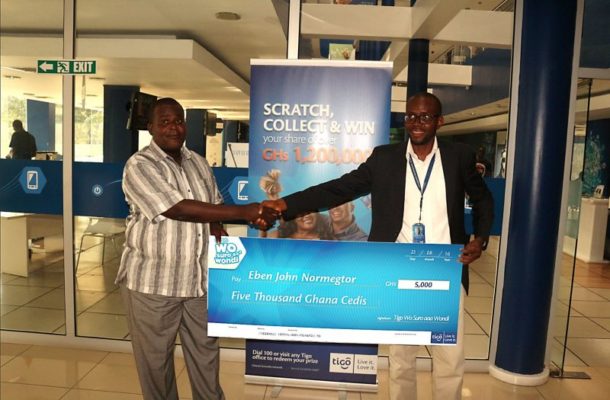 Tens of Tigo customers have won various cash prizes and branded gift items as part of the telecom operator’s biggest consumer promotion for 2016. The instant cash rewards won so far range from GHS5,000 and below.One of such winners, Eben John Normegbor, a Travel consultant was on Monday presented with a cheque for GHS5,000 at the Tigo shop on Barnes road in Accra. Another winner, a 42-year-old petty trader at the Kasoa market in the Central region, Bertha Yartey was also presented with a cheque for GHS2,000.Eben John Normegbor, a Tigo loyal customer, said he bought a GHS5 recharge card at Kwashiman, a suburb in Accra and scratched the silver panel to see a cash reward of GHS5,000. Elated Normegbor hinted that he would use the money to pay for his wife’s medical bills and settle the new semester’s school fees for his two children.“My wife has been on admission at the Bator General Hospital for weeks and this money will help me settle her medical bills and take her home”, he said.Narrating how she also became a winner, Bertha Yartey, said she purchased a GHS5 airtime and asked her daughter to load it unto her phone. After scratching off the silver panel, her daughter started jumping excitedly that they had won GHS2,000.“I have been with Tigo for three years and I am a huge fan of particularly their mobile money service, Tigo Cash.”Both Eben, Bertha and several others are aiming for the Bingo cash prizes of GHS100,000 while they continue to win airtime and Tigo branded souvenirs.Customers automatically win the Bingo prizes of GHS100,000 by collecting all the images of the Big Six in Ghana’s political history which is hidden behind the silver panel on recharge cards costing GHS2 and above.Source: Ghana/starrfmonline.com/103.5FM