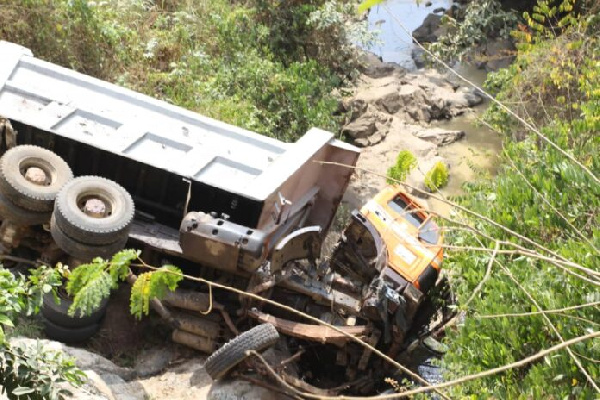 The state of the truck after the incident

A Tipper truck conveying sand has crashed into river Asuoyaa on Okorase stretch of the Koforidua to Akuapem-Mamfe road in the Eastern region.

Eyewitnesses say, the Truck which was heading towards Mamfe direction suddenly reversed when ascending the hill after the narrow bridge over river Asuoyaa.

The vehicle went out of control, plunged over the cliff and crashed on rocks in the river.

The driver’s mate reportedly managed to safely jump out of the truck immediately it began to reverse but the driver was trapped under the truck but miraculously, he did not die. Fortunately, the river has dried up to the harmattan.

It took the intervention of some young men in Asuoyaa Community who went to his rescue after extricating him from under the Truck.

The truck driver who was in critical condition has been rushed to the Eastern Regional Hospital in Koforidua for emergency care.

Officials of Ghana National Fire Service who came to the scene are reported to have said they don’t have the capacity to tow the accident vehicle from the river.

This pronouncement has heightened fear among residents who depend on the river downstream over possible pollution by leakage of diesel and oil into the river.