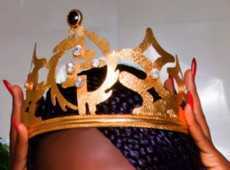 The police in the Eastern Region have charged culprits involved in the molestation of some contestants of the 2019 Miss Commonwealth Beauty Pageant at a shrine.

The bizarre case happened at a shrine belonging to one Togbe Shito at Akyem–Kukurantumi in the Abuakwa North Municipal of the Eastern Region.

Some of the girls were allegedly made to go naked at the shrine and lashed with a machete after Princess Duncan, the Chief Executive Officer of the Miss Commonwealth Pageant, organizer of the event, had allegedly dragged them there over a missing GH¢500.

Two other suspects who are believed to be Togbe Shito’s attendants are also wanted by the police for their involvement in the girls’ ordeal.

The suspects have now been slapped with provisional charges of ‘assault’ and ‘trial of an ordeal’ and the docket referred to the Attorney General’s (AG’s) Department for advice.

Deputy Eastern Regional Police PRO Supt Francis Gomado confirmed that such a report was made to the police and said they were waiting for the directive from the AG’s Department to proceed with the case.

Togbe Shito yesterday said on radio that he did not torture the girls as being claimed.

He also said no girl was stripped naked at his shrine but could not deny that the girls were brought to him.

He said on Adom FMthat one of the ladies ‘confessed’ to stealing the money after some ‘spiritual incantations’ had been done and claimed the girl in question ‘begged’ the organizers for the embarrassment caused them.

The fetish priest also said the victim might have faked the bruises on her body to court public sympathy.

DAILY GUIDE understands that it was one of the contestants of the pageant called Gloria, who was accused of stealing the money without any proof.

Sources also said another contestant called Nana Ama Essien was the one who complained that her GH¢500 was missing and as a result she called her brother at Nzema in the Western Region, who claimed an oracle had revealed that it was Gloria who took the money.

Based on that, Princess Duncan assembled about 10 of the contestants and sent them to Togbe Shito to compel the girls to tell the truth.

Narrating her ordeal on Facebook, Gloria posted, “I contested for Miss Commonwealth Ghana which was held on the 7th of September. During our stay in the pageant house, one contestant’s GH¢500 got missing, my SIM card got chewed and mobile money pin code got changed. The pageant is over and I made it to Top 5 and this automatically means I have a contract with them.

“I was called by the CEO on Sunday, 6th October, to come to her house on Monday morning to talk about my trip to the UK. I got to the CEO’s house and she said we were going to Koforidua to find out who took the money. We got to Koforidua and mind you, it was a juju man’s house, with a very big house with two different fence walls.”

“We were 10 in number and the juju man gave us an egg with powder to throw. If you’re the one who took the money yours will break but if not yours it will turn out cooked. I did and mine turned out cooked. I was asked to go naked myself by the juju man and he started beating me with cutlass and put my finger into boiling oil (sic),” she added.

She said after her ordeal “I was given an egg to swear not to tell any third party. They said if I do I will die (sic).”

The complainant went to Accra after her ordeal to file a report to the police and she was directed back to Kukurantumi to report the case.

Already, Ama Essien has claimed she was also a victim at the shrine and is reportedly threatening to sue organizers of Miss Commonwealth pageant.