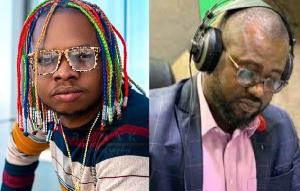 Emil Wood, popularly known as Nana Tonardo, has slammed Abeiku Santana for what he described as being biased throughout his interview with former 4X4 member, Coded, on OkayFM.

This was after he chanced upon excerpts of Coded’s interview where he was being grilled by Abeiku Santana for using Afia Schwarzenegger’s ‘dada damoase’ term without her consent.

Abeiku Santana hosted Coded on his ‘Ekwanso Dwodwo’ show where they spoke about the latter’s new Amanpiano single titled ‘dada damoase’, and why he failed to go through the necessary steps to adopt the phrase.

It was the case that Abeiku sometime during the interview placed a call to Afia Schwarzenegger, the originator of the ‘dada damoase’ term who rained heavy insults at Coded.

Afia said Coded’s ‘dada damoase’ song is a clear example of mockery and the fact that her consent wasn’t sought made things worse.

But Tonardo who seemed to have analyzed what transpired in the studio gave his two cents.

He descended heavily on Abeiku Santana for sitting aloof while Afia disrespected Coded.

“I chanced upon an interview between Coded and Abeiku Santana about his dada damoase song. During the interview, I realized that Abeiku Santana was being biased. He was biased about the whole interview such that, it was so clear. Abeiku Santana, you’re a big brother in the industry. I’m sure you’re cool with Afia Schwarzenegger the same way you are with Coded. I’m sure you have known Coded for a very long time. But there is one thing I have realized, that you are very scared of Afia Schwarzenegger. It looked like you were scolding Coded on behalf of her.

"If Coded used Afia’s phrase for a song and even sought permission from her, does it mean he should pay her? Abeiku Santana sometimes you people shouldn’t do that. You and I know the kind of girl Afia Schwarzenegger is in this country. She has disrespected everyone including you. I can boldly tell you that you fear her. You have to apologize to him because the way you treated him in the studio is not good at all. I’m sure you are of the same age with Coded if not a bit older than him. With all that happened, you have even portrayed yourself as a fool. Let's speak the truth and stop being hypocrites.”