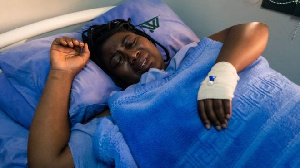 Zimbabwe's justice minister has threatened to prosecute three female opposition members who allege they were arrested and then abducted from police custody and sexually assaulted.

They say they were beaten and forced to drink each other's urine.

The three, including an MP, are being treated in hospital for their injuries.

Justice Minister Ziyambi Ziyambi said the women made up the story to divert attention from the fact that they broke lockdown rules by attending a protest.

They should be arrested for violating rules aimed at stopping the spread of coronavirus, he said.

"I don't believe the abduction is genuine," Mr Ziyambi told the BBC.

Opposition activists allege that abduction and torture remains a tactic of the authorities even after the end the presidency of Robert Mugabe, who was overthrown in 2017.

Cecilia Chimbiri, who is a youth campaigner with the opposition Movement for Democratic Change (MDC) party, has given graphic testimony to the BBC of how she, MP Joana Mamombe and Netsai Marowa, were maltreated over 24 hours by alleged state agents.

She said that they were stopped at a police checkpoint last Wednesday, as they were returning from a small protest march that they had organised in the capital, Harare, over the number of people going hungry during the coronavirus lockdown.

Two men in police uniforms stepped out an unmarked car, Ms Chimbiri explained, and told them that they were under arrest for flouting restrictions.

"They must have been following us," she said.

They were then escorted in a convoy to a police station where they were told to get out of their car and into another vehicle as they had gone to the wrong place.

It was then that Ms Chimbiri said men in plain clothes got into the vehicle, pushed their heads down and drove them out of the basement car park.

'Screaming inside the pit'

They were then driven to a location that she later learnt was about 120km (75 miles) north of Harare, where they were thrown into a pit dug into the earth outside and subjected to hours of beatings and sexual assault by five men, the activist said.

"I was praying and screaming inside the pit. At one point, I prayed for a swift death. I was in so much pain," Ms Chimbiri told the BBC on the phone from her hospital bed.

The three were left on Thursday night at the roadside on the outskirts of Bindura town, north of the capital.

The police have a different version of events.

Despite the fact that private and state-run newspapers reported on Thursday, a day after they went missing, that the police had confirmed the women's arrest, the police later denied making the statement.

'They broke the lockdown'

The justice minister said it was important to remember that the women had been involved in an illegal protest.

"Firstly there is a pandemic, and the world over people are being told to stay home. They decide to break that," Mr Ziyambi said.

"The lockdown has created an environment where they are no longer relevant. They wanted relevance. It is diversionary tactic and once they are discharged [from hospital] they must be arrested for breaking the law."

The women are now under police guard at a private Harare hospital.

The MP's condition is said to have deteriorated and she was in no condition to speak to the BBC and Ms Marowa was asleep when the BBC tried to contact her.

Dr Fortune Nyamande, who is the chairperson of Zimbabwe Doctors for Human Rights and is treating them, said a trend of such abductions had been witnessed over the last two years.

He refused to divulge the extent of their injuries, but said that he had been been trying to get them in a stable psychological state while attending to the physical injuries.

"We have attended to almost 1,000 cases of these extra-judicial measures with the same modus operandi. They seem to be on the rise, and it is time that the state holds whoever is doing that accountable," he told the BBC.

But Ms Chimibiri has little faith that will happen.

Umbrella group the Human Rights NGO Forum says that since President Emmerson Mnangagwa came into power in November 2017, it has documented and verified a series of organised violent incidents.

These include 24 extra-judicial killings, 23 cases of sexual assault, 92 abductions and beatings, 88 gunshots wounds or dog bites and 893 cases of assault.

The government has suggested that a third force or hidden hand is behind the spate of abductions under President Mnangagwa, who replaced Mr Mugabe.

The accusation is that people are bent on discrediting his government, whose investigations have yielded no arrests in the majority of cases.

During the Mugabe-era enforced disappearance was commonplace.

Itai Dzamara, a critic of the former president, was taken in an unmarked vehicle from a barber shop in 2015. He has now been missing for five years. At the time, the government described his abduction and disappearance as staged-
Source: bbc