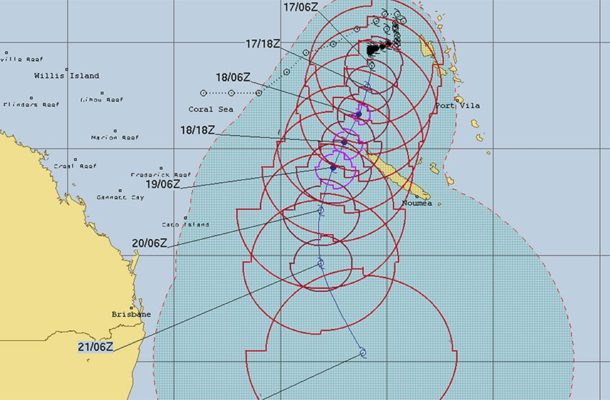 Tropical Cyclone Oma has developed in the Coral Sea and is currently located to the west-northwest of Port Vila in Vanuatu.

The storm has been moving away from the island nation with winds of 110 kilometres per hour and gusts as high as 140km/h.

Earlier, it had stalled west of Vanuatu's biggest island of Espiritu Santo. Although Oma did not make landfall, its outer bands did lash the northern islands of the country, reportedly bringing down trees and houses in the area.
The Vanuatu Red Cross said there has been some damage to property and crops in the region.
Schools in northern New Caledonia have been closed. They are due to reopen on Wednesday.
Cyclone Oma has been lingering around Vanuatu's waters for around a week now but the system is now in the process of moving away to the north and west of New Caledonia.
The Vanuatu Meteorology and Geo-Hazards Department continue to warn of heavy rainfall and flash flooding over low lying areas. Over-topping of river banks remains a threat along with coastal flooding.
Rough seas are expected in the area with heavy to phenomenal swells over the affected areas. People are strongly advised not to go out to sea until the system has moved further away from the area.
While the eye of the storm is not expected to pass over land, Oma is forecast to strengthen with sustained winds reaching 150km/h and gusts touching 185km/h by Tuesday, as the tropical cyclone passes to the west of New Caledonia.
Warnings have been issued for the possibility of flooding rains and damaging winds, which could be in excess of 100km/h.Source: aljazeera.com