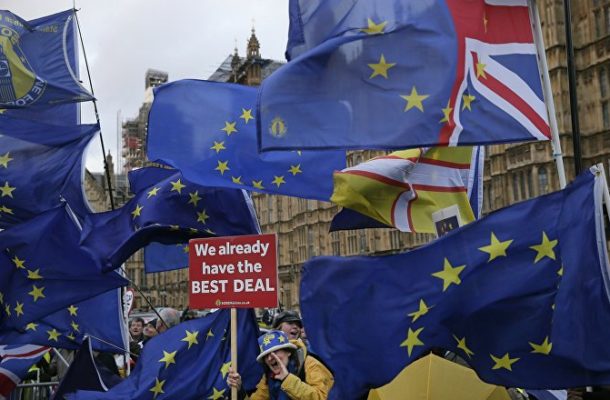 Earlier this month, at least 5.8 million people signed a petition urging British Prime Minister Theresa May to cancel Brexit and keep Britain in the bloc. The government, however, rejected the appeal, which now is due to be debated by the Parliament, because the petition has broken the 100,000 threshold needed for consideration in the legislature.

"Before the European Council, I said that we should be open to a long extension if the United Kingdom wishes to rethink its Brexit strategy, which would, of course, mean the United Kingdom's participation in the European Parliament elections. And then there were voices saying that this would be harmful or inconvenient to some of you. Let me be clear, such thinking is unacceptable. You cannot betray the six million people who signed the petition to revoke Article 50, the one million people who marched for a people's vote or the increasing majority of people who want to remain in the European Union", President of the European Council Donald Tusk told the parliament.
The European Council gave London a Brexit extension until 22 May provided the withdrawal deal is passed by the UK House of Commons by 29 March or an extension until 12 April if the deal is voted down.
&lt;br&gt;
DETAILS TO FOLLOWSource: sputniknews.com