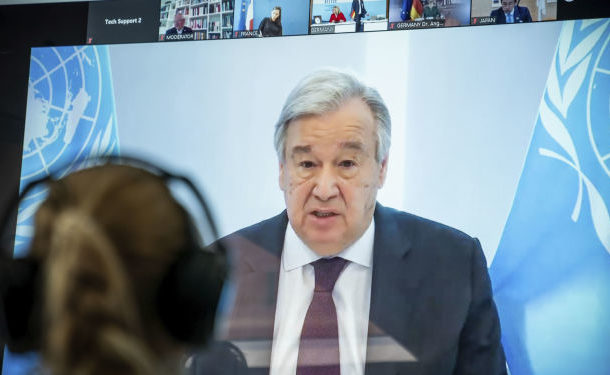 UN Secretary-General Antonio Guterres claimed that sexism in the design of protective equipment placed women health workers at greater risk of catching the coronavirus, and said economic problems stemming from the pandemic were an opportunity for social justice.

UN Secretary-General Antonio Guterres is at the centre of a Twitter pile-on after his claim that a "millennia of patriarchy" has exacerbated the COVID-19 pandemic.
The UN's Twitter account tweeted a video and transcript of Guterres' speech to an online 'Town Hall with Young Women from Civil Society Organizations' meeting on Sunday.
The former prime minister of Portugal called the economic slumps resulting from coronavirus lockdowns in dozens of countries an "opportunity" to create social "justice."

“The pandemic is only demonstrating what we all know: that millennia of patriarchy have resulted in a male-dominated world with a male-dominated culture which damages everyone – women, men, girls and boys," Guterres remarked.

Guterres said that Personal Protective Equipment (PPE) is often made to fit men rather than women as standard, putting female healthcare workers at greater risk of catching the virus. He also cited a statistic that fewer than 30 percent of managerial posts in the health sector are held by women, while over 70 percent of the workforce are female.
“I have many times said that behind many of the problems I have been talking about, there is an essential question of power. It is indeed addressing this question of power that we must concentrate all our efforts.." the UN chief noted.

"We need to take the opportunity of an economic reset to ensure the rights to life, dignity, and security for everyone."

Many feminists argue that, under the patriarchy theory, men are responsible for, and benefit from, the oppression of women - no matter what rung of the social ladder they stand on.
US conservative commentator Mike Cernovich, an outspoken critic of feminism and theories such as the patriarchy, tweeted sarcastically: "Holy sh*t it's real."

Other users jumped in with snide comments, with one comparing the UN to its predecessor the League of Nations, disbanded after its failure to avert the Second World War.