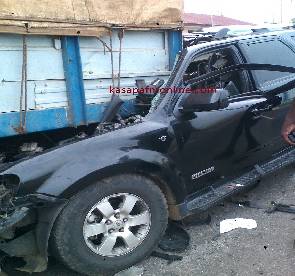 A driver and another occupant in a Ford Escape four wheel drive car are feared dead in an accident that occurred opposite the Legon Mall, close to the offices of the Electricity Company of Ghana Tuesday morning.

It is not clear what caused the driver of the Ford car to ram into a stationary fully loaded tipper truck. The victims who appeared lifeless were rushed to the hospital for medical care soon after the accident.

The police were however at the accident scene to manage the huge traffic that built up following the unfortunate incident.