Two referees banned for the rest of the season 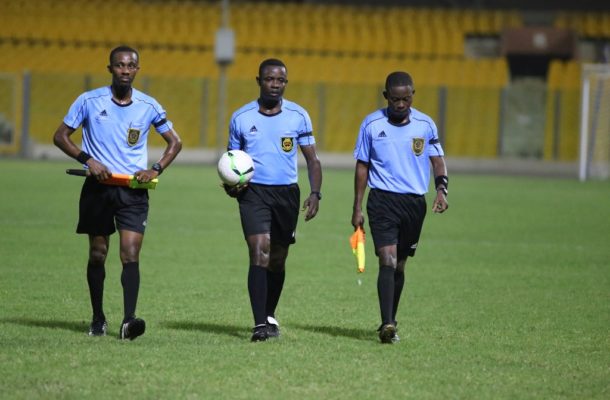 The GFA Match Review Panel has announced three decisions on complaints received from Clubs in the ongoing season.

Below are the decisions:

Eleven Wonders complained that in the 2nd and 76th minute of the match, the referee ignored a ball that hit the hand of a Bechem United player and another foul committed by an Eleven Wonders player.

Also,  they complained about decisions taken by Referee Eric Owusu Prempeh in the 82nd and 83rd minutes in favour of Bechem United.

After watching the video of the match, the Panel observed that there was no hand ball incident. The ball hit the hand when the hand was on the body of the player.

On other incidents, the Panel found that the referee did his best under those circumstances.

Consequently, the Match Review Panel decided to grant the Referee the benefit of the doubt under the circumstances and encouraged him to live above reproach.

Wassaman FC complained about a Referee Isaac Bassaw and Assistant Referee One, A.F. Zakari’s decision to disallow a goal they scored which resulted in the abrupt end of the match.

Per the video watched, the Committee found that the decision of the referee was wrong and Wassaman should have been credited with the goal.

The Committee also found that the performance of the referee and his Assistant One contributed a great deal of negativity in the game which finally resulted in the abrupt end of the match.

Referee Isaac Bassaw and Assistant Referee are hereby banned from officiating for the rest of the league season.

Wamanafo Mighty Royals accused the match officials in their Matchday 6 game against Nkoranza Warriors of bad officiating and intimidation by supporters of the home team. They claimed that the match officials awarded an unfair penalty against their team.

After watching the video, the Panel did not see any bad officiating, or an unfair penalty awarded as claimed by the Wamanafo Mighty Royals.