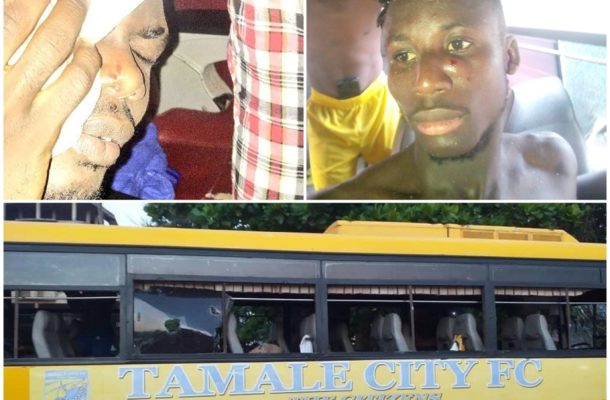 Two persons have reportedly been apprehended by the Police for their involvement in the barbaric attacks on Tamale City FC last week after their  Division One League game against  Baffour Soccer Academy at Nsoatre in the Bono Region.

The two persons are said to be supporters of Baffour Soccer Academy.

According to Kumasi based OTEC FM, the two supporters were sent to the Fiapre court and have since been remanded for two weeks  pending further investigations.

Division One League side Tamale City FC were the latest victims of assault in the league as players and officials of the team were attacked by some hooligans at Nsoatre for drawing with Baffour Soccer Academy at the Twumasi Sports Complex in their league game on Sunday.

Tamale City who are at the summit of the Zone One league drew with Baffour Soccer Academy but after their game were allegedly attacked by some supporters of  Nsoatreman.

Their bus was smashed with stones as some players and officials sustained various degrees of injuries and were admitted at the hospital.

Seven players and officials  were injured with the head coach of the among those who were seriously injured.