UHAS land owners yet to receive compensation from gov’t 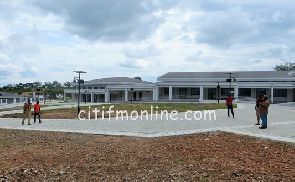 Land owners of the University Health and Allied Sciences campus at Sokode near Ho in the Volta region are threatening to block access to the university campus.

This, they say will compel government to pay them compensation for lands acquired for the establishment of the university.

Government, through an Executive Instrument (EI), compulsorily acquired the lands for the first public university in the Volta region, which was established by an Act of Parliament in 2011.

Although construction of structures at the permanent site has been completed they are yet to be compensated.

Following various failed attempts to get government to keep to its part of the agreement, the land owners resorted to a court action early on this year.

A Ho High Court judge subsequently advised the Attorney General to consider meeting the land owners to find an amicable solution to the needless litigation.

But the chairman of the association, Benoni Glalah says the arbitration at the Attorney General’s Department has delayed unduly.

“We are not against the acquisition for public use, we are all Ghanaians, we like it, is good but the constitution says prompt and adequate compensation to be paid. They should pay it that’s all!” he stated.

They say what broke the camel’s back is a comment made by the Volta regional Minister Adjoa Ntosu on a local radio station (Kuul FM) claiming that the individual land owners do not have the requisite documents to receive their compensations. Her comment infuriated members of the association who have threatened to prevent workers and students from entering the campus.

“We are thinking; we are adults and not idiots. We don’t have document as claimed by the regional minister so we have to be prove to her that we have our documents. If she is really a regional minister and she not talking out of ignorance and sheer incompetence, she should got to the regional land officer or the land board in Accra” Mr Glalah said
 
“The action is to seize the school or block the school for the students not to go there again or they give our land back to us that’s all!” another aggrieved land owner added.

Although they did not immediately state when such an action would be taken, members say they would take authorities by surprise.

Wisdom Dafeamekpor, a consultant for the group who expressed worry over the delay of payment say, all requirements have been met but they are yet to receive any notification from government.

He said the group apart from planning to barricade the entrances to the school has vowed to boycott the general elections. He said he is now helpless because he has exhausted all available avenues.

“It would happen like 2000 when people boycotted the elections and we went to runoff and it caused the NDC. If they are not careful history would repeat itself.”

Meanwhile when Citi News contacted the regional Minister she denied the claims adding that she only recounted earlier challenges encountered in processing the documents at the land commission.

“Initially, these were the problems we were facing; documentation and they have been advised to do so. So the lands department is really working on them. Because the President indeed promised that he is really going to pay them. And you know our President is the President that when he said it would be done, it would surely be done. They should bear with us all these would be done. But because this is an election year pressure is mounting here and there,” she explained.