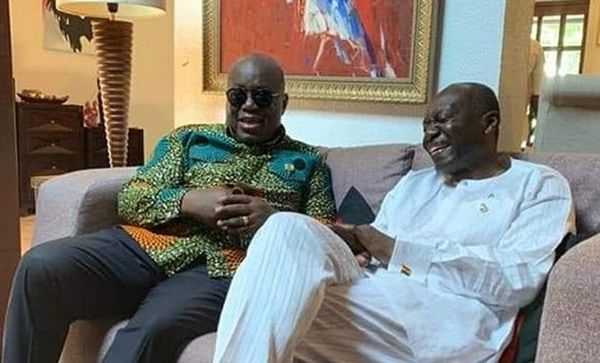 The calls have become even louder since July 1 when the government announced that it was seeking to start formal engagements with the International Monetary Fund, IMF, amid an economic downturn.

Former President John Dramani Mahama is among one of the most vocal advocates for Ofori-Atta's sack citing principally the mismanagement of the economy.

Appearing on Joy News' The Probe programme on July 3, 2022, Oppong-Nkrumah disclosed that Ofori-Atta enjoyed the full support of the President to continue in his role.

“If you look at the work that our Finance Minister has led us to do in the first part before these pandemics hit us, it will not support that argument that because he was initially of the view that we can do this domestically, he should be fired. I don’t think so,” he said.

He stressed that despite the Minister's strong views on going to the IMF, he was subject to the decisions of the collective i.e. cabinet and ultimately the President whose decision it was to approach the global lender.

Meanwhile a team from the IMF is expected to come to town on Wednesday, July 6 to start engagements with the government on a programme.

The team will meet officials of the Finance Ministry, government's Economic Management Team and the Presidency.

After their one-week stay, it is expected that details of the bailout programme and attendant conditionalities will be communicated.

The visiting team will be augmented with staff here at the local office of the Fund in their engagements.

In a statement signed by Information Minister, Kojo Oppong Nkrumah, the engagement will be to invite the Fund to support an economic program put together by government.

“The President of the Republic of Ghana, Nana Addo Dankwa Akufo-Addo, has authorised Finance Minister, Ken Ofori-Atta to commence formal engagements with the International Monetary Fund (IMF), inviting the Fund to Support an economic program put together by the Government of Ghana,” the statement said.

Among other things, the government says the IMF support will provide “balance of payment support as part of a broader effort to quicken Ghana’s build back in the face of challenges induced by the COVID-19 pandemic, and recently, the Russia-Ukraine crisis.”

In the face of growing economic hardships, several critics including the opposition National Democratic Congress and Civil Society Organisations (CSOs) had implored the government to seek an IMF bailout.

But in several instances, the government insisted against going to the IMF while touting several homegrown policies including E-levy as remedy to the current situation.

The Minister for Finance Ken Ofori-Atta, in January 2022 described an IMF bailout as disastrous to Ghana.