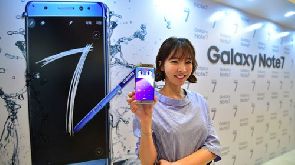 The South Korean firm issued a recall of the smartphone in September, and last month assured customers the fixed devices were safe.

But there have now been two reports of phones that have been replaced and deemed safe starting to emit smoke.

Samsung has said it is investigating the new reports.

Meanwhile, South Korea's Yonhap news agency quoted an unnamed official at a Samsung supplier on Monday as saying that production of the phone had been halted temporarily.

Samsung did not immediately respond to a request for comment on the report.

Both AT&T and T-Mobile in the US have said they will no longer replace the devices, while the latter said it was stopping the sale of the phone.

"While Samsung investigates multiple reports of issues, T-Mobile is temporarily suspending all sales of the new Note7 and exchanges for replacement Note7 devices," T-Mobile said on its website.

Meanwhile, AT&T said: "We're no longer exchanging new Note 7s at this time, pending further investigation of these reported incidents," and advised customers to exchange them for other products.

Samsung said in a statement last month that the issue of overheating was caused by a "rare" manufacturing error that resulted in the battery's "anode-to-cathode [negative and positive electrodes]" coming into contact.

But last week, a domestic flight in the US was evacuated after a replacement Note 7 started emitting smoke in the cabin. And a man in Kentucky reportedly woke up to a bedroom full of smoke from a replaced Note 7.

In its latest statement, Samsung said it understood the concerns of carriers and consumers about the newly released replacement Note 7 devices.

"We continue to move quickly to investigate the reported case to determine the cause and will share findings as soon as possible.

"If we conclude a product safety issue exists, we will work with the CPSC (US Consumer Product Safety Commission) to take immediate steps to address the situation."