US election 2016: George HW Bush 'to vote for Clinton' 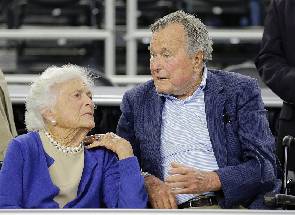 The former president's office has not confirmed the report, with a spokesman saying he was checking.

Mr Bush, who held office from 1989 until 1993, has not endorsed Republican candidate Donald Trump.

Neither has his son, Jeb Bush, who unsuccessfully competed for the Republican nomination, or other rivals in the race, Ted Cruz and John Kasich.

Ms Kennedy Townsend, a former Lieutenant Governor of Maryland, posted a photo on Facebook of a meeting with George HW Bush, alongside the caption: "The President told me he's voting for Hillary!"

Mr Bush's spokesman, however, was cautious.

"Those reporting how @GeorgeHWBush will vote this year, it's not clear anyone was there to verify KKT [Kathleen Kennedy Townsend]. Still checking, keep your powder dry," Jim McGrath wrote.