US 'killed IS leader in Afghanistan' 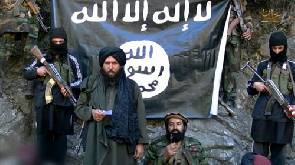 Hafiz Saeed Khan, leader of so-called Islamic State (IS) in Afghanistan and Pakistan, died in a US drone strike last month, the US believes.

Last year, the Afghan intelligence agency said it believed Saeed Khan had died in a drone attack in Afghanistan's eastern province of Nangarhar.

However, IS insisted its leader had survived that attack. On Friday, the US said he had been killed in a new drone attack in Nangarhar's Achin district on 26 July.

The drone strike was carried out three days after IS carried out its most devastating attack in Afghanistan, killing 80 people and wounding 230 at a rally of Shia Muslims from the Hazara minority in the capital Kabul. IS, a Sunni Muslim group, regards Shia as heretics.

Pentagon spokesman Gordon Trowbridge said Saeed Khan had been killed in an "air strike", without specifying if a drone had been used.

Khan was known to directly participate in attacks against US and coalition forces, and the actions of his network terrorised Afghans, especially in Nangarhar," Mr Trowbridge added.

On 26 July, Afghan security sources announced that some 120 IS militants had been killed in a military operation in Nangarhar but they referred to Kot district, not Achin, and did not mention Saeed Khan.

The militant was reported killed by a drone strike in Achin in July 2015 as well.

Afghanistan's Taliban group has frequently clashed with IS since January 2015.

The Taliban's dominance in a region home to numerous local and foreign militant groups is facing a serious challenge from IS, which has been gaining some support.

There has also been evidence that IS is trying to recruit Taliban fighters, with several Taliban commanders declaring allegiance to IS.