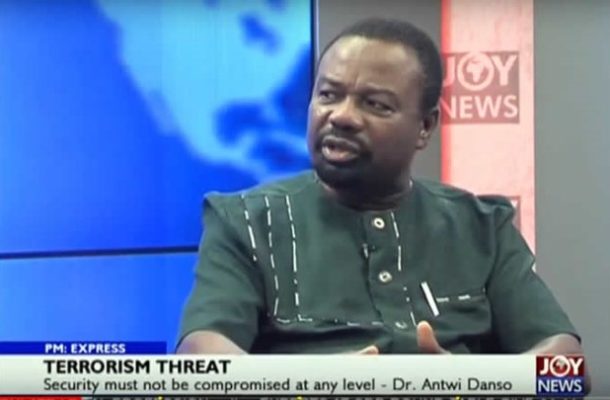 Security analyst, Dr Vladmir Antwi-Danso, has backed concerns of a possible terror attack on Ghana following a deal that may increase U.S. Military activity in the country.

Dr Antwi-Danso says in many instances where extremists have attacked an African country, they have done so because of the presence of their key enemies – the United States and other Western countries – in that country.

“Basically my worry is that today’s world is a world of chaos. There are several global hiccups and you become a target because of that type of cooperation, and American cooperation is impacting very badly in Manila [Philippines] in Japan, in Turkey…we need to talk about all these things,” he said.

A leaked Defense Corporation Agreement between Ghana and the US has been criticized widely as a threat to the country’s sovereignty and security.

The Cabinet-approved deal has been tabled for consideration in Parliament, a move the government has touted as an evidence of its transparency.

This is not the first time Ghana has struck a military cooperation agreement with the United States.

A similar agreement was reached in 1998 and 2007, however, many commentators are concerned about the reviewed provisions in the current agreement.

Related: US not establishing military base in Ghana – Nitiwul parries report

In particular, a clause in the agreement that provides unimpeded access to and use of some facilities and areas to the U.S. forces and Military Contractors has been a major source of concern.

Speaking on PM Express, a current affairs programme on the Joy News channel (Multi TV), Dr Antwi-Danso urged Parliament to take a critical look and review that clause in the agreement when the deal is brought to the House.

“Come to think of the clause that talks about the use of Military Contractors…these people are not acceptable anywhere in the world and they can do anything they want. They did it to Iran…

“The Burkina Faso issues, the Ivorian Issues, the Malian Issues came not because those people [terrorists] hate these countries but they are targeting an enemy – which is legitimate where war is concerned,” he said.

He has called for a healthy bi-partisan discussion that focuses on Ghana's security needs.