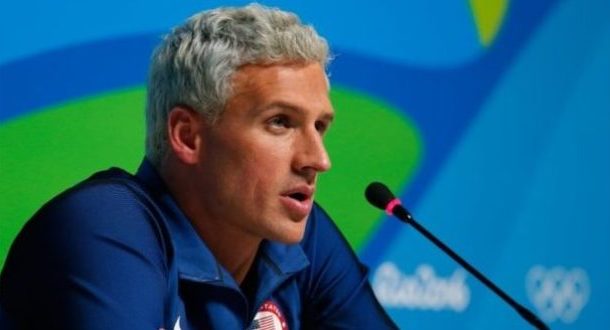 US Olympic swimmer Jimmy Feigen has agreed to pay nearly $11,000 to a Brazilian charity over his involvement in a dispute about an armed robbery.

He was one of four gold medallists, along with star Ryan Lochte, who hit the headlines after Mr Lochte said the group had been robbed in Rio. CCTV footage later contradicted their story, showing the swimmers had vandalised a petrol station.

Mr Lochte left Brazil on Tuesday but Mr Feigen stayed behind and was detained. The two other members of the group, Gunnar Bentz and Jack Conger, were pulled off a flight in Rio on Thursday night and questioned by police.

They deny any involvement in the false robbery claim and were allowed to leave for the US on a later flight. Breno Melaragno, Feigen’s lawyer, said: “After a long deliberation, this agreement was reached… he will donate 35,000 reais ($10,800) to an institute, and with that the case is resolved. “After this donation is done, his passport will be given back to him, and he will be free to return home.” Mr Melaragno did not say which charity, or institute, would receive the donation.

The bizarre story began when Mr Lochte told a reporter that the four men were robbed at gunpoint by thieves disguised as police officers. In a colourful description of the 14 August robbery, the swimming star said he refused to get on the ground despite having a gun pressed to his forehead. But when police began to investigate, the evidence appeared to tell a different story. Rio’s civilian police chief Fernando Veloso has now ruled out any possibility that the crime occurred.

“No robbery was committed against these athletes. They were not victims of the crimes they claimed,” Mr Veloso said. He told reporters that one or more of the athletes had instead vandalised a toilet in a petrol station and then offered to pay for the damage.

The Americans paid and left after armed security guards intervened, he said. One guard had justifiably drawn his gun after one of the swimmers began behaving erratically, Mr Veloso added. He warned that the swimmers, who had repeatedly changed their accounts of what happened, could “in theory” face charges of giving false testimony and vandalism.

But later on Thursday, the men’s lawyer Sergio Riera said Mr Bentz and Mr Conger had been allowed to leave the country by a special Olympic court. Mr Feigen “provided a revised statement this evening (Thursday) with the hope of securing the release of his passport as soon as possible,” said the US Olympic Committee (USOC). The USOC statement confirmed Mr Veloso’s version of events, and added that “the behaviour of these athletes is not acceptable, nor does it represent the values of Team USA”.