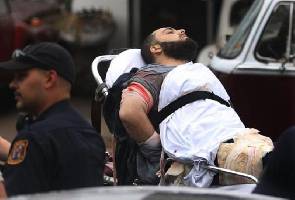 An Indian immigrant businessman has been describing the moment he found the New York and New Jersey bombings suspect napping in front of his bar.

Harinder Bains recognised Ahmad Khan Rahami from reports after discovering him slumped against the glass of his pub doorway in Elizabeth, New Jersey.

The Sikh told CNN he initially thought the 28-year-old most-wanted suspect was a drunk.

Mr Rahami was subsequently arrested after a gun battle with police.

The bar owner said he asked the stranger to move along and the suspect apologised.

After watching television news from another business across the street, Mr Bains was startled to recognise Mr Rahami's face in coverage of the manhunt for the bomber.

Police confronted the suspect, who pulled a handgun and shot one of them.

"He (the suspect) shot twice and the glass splinters almost hit my store," Mr Bains said.

Two officers were taken to local hospitals and treated for non-life threatening injuries.

But Mr Bains deflected credit from US media that he is a "hero", saying it was law enforcement that deserved praise.

"I did what I think every American would have done," he said. "We will be more stronger if we do everything together."

Mr Rahami, a US citizen born in Afghanistan, is charged with five counts of attempted murder of a law enforcement officer stemming from the shootout.

Police have also said his fingerprints and DNA were found at the scene of the Saturday night's bombing in Manhattan, which wounded 29 people, none seriously.

Investigators also say they have evidence linking him to a pipe bomb that blew up harmlessly on Saturday morning in Seaside Park, New Jersey, before a charity race to benefit Marines.

An unexploded pressure-cooker bomb was found blocks away from the New York City blast.

And five explosive devices were discovered on Sunday night in a rubbish bin in Elizabeth, not far from where Mr Rahami was arrested.

Mr Rahami - who lived with his Muslim family above their fried-chicken restaurant in Elizabeth - is being held on $5.2m bail after undergoing surgery for a gunshot wound to his leg.

Authorities have said no other suspects are at large.

The blasts have also fuelled the debate about US national security seven weeks before the presidential election.