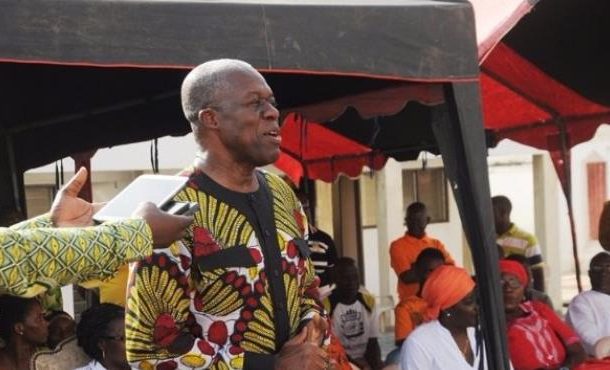 Vice President Kwesi Amissah-Arthur has charged the Western Regional NDC Campaign Taskforce to work towards increasing the party’s parliamentary seats from the current 18 to 24 and also widening the presidential vote gap between President John Dramani Mahama and his opponents.

He therefore asked the rank and file of the party to involve themselves in house to house campaign to enable the party to retain political power.

Speaking at the outdooring of the taskforce at Awiabo in Ellembelle, Vice President Amissah-Arthur said the NDC government has done a lot and it is determined to do more.

He asked Ghanaian to value the country’s peace and safeguard it for development.

The Vice President called for unity among Ghanaians, saying when there is unity, peace and stability, the country benefits immensely.

Vice President Kwesi Amissah-Arthur, said the taskforces are to complement the work of the party in the various regions. They are therefore not to take over the work of the regional chairmen and the Regional Ministers.

Mr. Asiedu Nketiah introduced the NDC’s Parliamentary candidates in the region to the supporters.

He cautioned any member of the party who contested the parliamentary primaries and contemplating going independent risks being suspended for more than four years.

Also, any member who will be caught campaigning for skirt and blouse vote runs the risk of being dismissed outright from the party.

He therefore advised all the parliamentary aspirants who lost in the primaries to throw their support behind the candidates who have been elected and accepted by the party.

Mr Asiedu Nketiah said the support of every member and sympathisers is needed in prosecuting the party’s 2016 campaign.

On NDC’s manifesto, he said it will be launched in Sunyani in two weeks.

He described the content of the manifesto as a co-ordinated message, detailing what the NDC government has done, what it is doing and other things it wants to do.