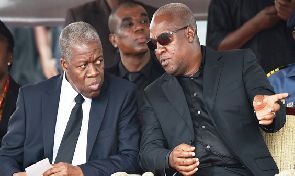 Vice president Paa Kwesi Amissah-Arthur has suggested some opponents of the National Democratic Congress are plotting to rig this year’s presidential and parliamentary elections on December 7.

In a statement that is likely to generate controversy, the vice president urged the NDC supporters and sympathizers to be extra vigilant on the day of the elections in order to safeguard the interest of the party. “I will urge all of you to be extra vigilant. NDC needs help. On December 7, some people will try to cheat the NDC.

Be very vigilant to ensure no one succeeds in cheating us,” he told party supporters at Asawase constituency at the weekend.

This was during his campaign tour of the Ashanti Region. NPP demands further particulars But in a sharp rebuttal, the Deputy Communications Director of the NPP, Anthony Karbo has called for immediate investigations into this allegation, since according to him, is a serious matter “We condemn them in all sense and we think that the security agencies will have to hold the vice president to give further and better particulars to this comments; they have to take serious view of this comments,” he told Kwakye Afreh-Nuamah on 3FM’s MIDDAY news He added: “It is unfortunate the vice president is accusing the position of a sinister plan to rig this election.

This is pathetic because the vice president is the head of the security agencies in this country and one would have expected that he would have guarded himself with comments that he will be making” However, the Ashanti Regional branch of the NDC has strongly defended the comments by Mr Amissah-Arthur, and rejected calls for an investigation into the matter.

Its Deputy Secretary, Mr Kwame-Zu explained the vice president was right in his call. “To the extent that he (Anthony Karbo) is requesting that the security agencies should investigate the issue, we don’t need any investigation, it is common knowledge that the NPP itself cannot put its house in order,” he said “This is not a political party that is committed to decent campaigns in winning an elections.

They have not for a long period now shown a clear demonstration towards how they can unseat the sitting government,” he added.