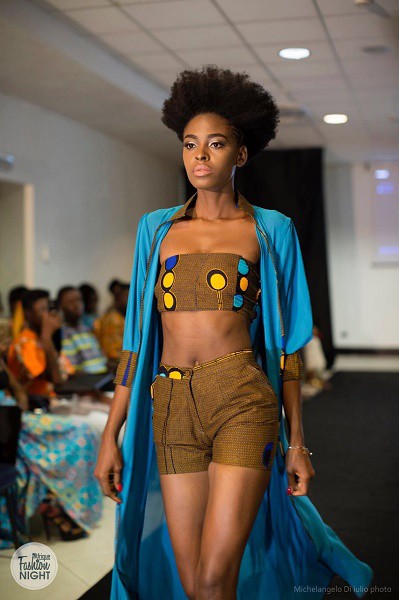 It was a night of pure Afro-Euro Fashion showcase, African cultural and musical display was at its best in Europe and African inspired design was not in short supply.

The gathering was a combination of fashion enthusiasts, Africans in the Diaspora and European Fashion critics, it was a full house with tickets sold out.

The event was the Afrique Fashion Night Italy 2016, held at the Fiera Hotel Brescia in Italy and the special guest of honor was top model Victoria Michaels.

After thrilling the audience with a keynote address titled "the evolution of African Fashion" Victoria followed up with an unforgettable display of her craft on the runway as she opened and closed the show for both African and European designers.

Speaking at the event, the Founder of Afrique Fashion Week Italy, Miss Irene Appiah Kubi had this to say about the International Model -" Victoria Michaels mirrors the vision of the AFWI, she is a successful African fashion export to the world as a model, we are also using this maiden edition of the fashion night to position the brand as an authentic showcase of afro-euro fashion here in the West''.

She went on to say that Victoria Michaels achievement as a model, entrepreneur and advocate is something to celebrate as Africans.

Recall that Victoria Michaels was the Brand Ambassador of the prestigious Africa Fashion Week London 2015.