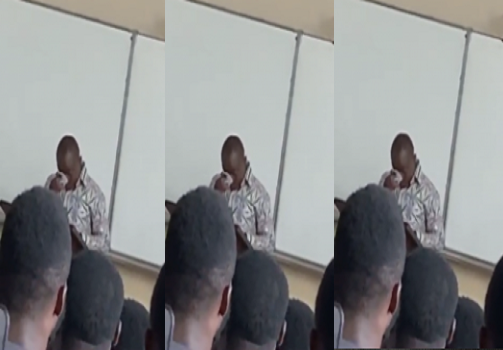 Outspoken political science lecturer at the University of Ghana, Professor Ransford Edward Gyampo, has been given what is believed to be the biggest embarrassment in his life after his students trolled him in class over his involvement in the ‘Sex-for-grade’ scandal.
Professor Gyampo, in a video captured by one of his students, was wiping tears off his face whilst the class ‘booed’ at him unconcerned.

With teasing comments like ‘capture him’, ‘you did it’ in the background, Mr. Gyampo stood in front of a full class whose members did not fail to register their thoughts on the issue.


In excerpts of the video released on BBC Somalia’s Facebook page, Professor Gyampo persuaded the reporter to meet him at the mall where he was caught on camera making “numerous [alleged] inappropriate demands.”

In the report, he also allegedly requested to kiss the reporter.

Barely hours after the release of the video, he’s already denied.


The lead reporter in the exposé, Kiki Mordi, said she was also a victim of sexual harassment when she was in school.

The BBC said its female reporters were “sexually harassed, propositioned and put under pressure by senior lecturers at the institutions” while they were wearing secret cameras.

The bulk of the excerpt released spent time in the University of Lagos and one of its lecturers alleged attempts to proposition a student seeking admission into the school.