Violent clashes in Kumasi; scores of people injured as police arrest over 80 people 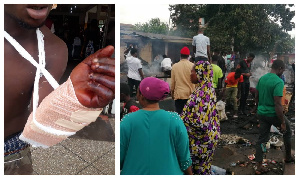 Violent clashes last night erupted in Dagomba line a suburb of the Asokore Mampong municipality in the Ashanti Region.

This follows a protracted land dispute between two settler tribes Hausa and Dagomba in the vicinity.

An eyewitness who wants to remain unanimous spoke exclusively to Ghanaguardian.com

"I think the dispute is between the indigenes who are mostly Dagomba and the hausa. I just sent someone to Manhyia hospital whose hand has been chopped off. As I was there 8 people were brought to the emergency ward.

At around 1 am at dawn I saw a huge crowd approaching so I had to run for my life. As I left I heard people knocking on the doors of others. When they speak Hausa to you and you respond in same language you are safe If not you are butchered" he narrated

It started on Wednesday  after a supposed owner of the land, who had secured a court order, tried to evict hundreds of squatters to pave way for a school but the clashes were foiled by the Police.

Clashes ensued last night between the two settler communities prompting the Police to move to the scene to try and restore calm but members of these two groups some of who where wielding machetes, cutlasses and stones descended heavily on the Police forcing them to call for re-enforcement.

A bus arrived carrying huge number of people which came over to support members of their tribe.

Petrol bombs were thrown into homes, there were sporadic shooting, while the women among them were gathering stones for their male counterparts to hurl at each other.

Several people sustained deep lacerations and cutlass wounds with most of the injured admitted at the Manhyia Government hospital while those in critical condition were referred to the Komfo Anokye Teaching hospital.