VISMA Foundation donate to Black Queens ahead of AWCON 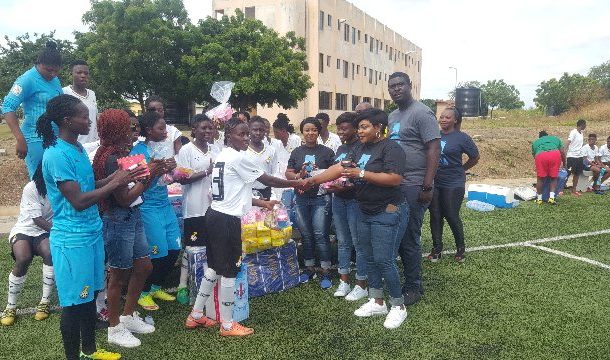 VISMA Foundation have made a donation to the Black Queens ahead of the 2018 Africa Women's Championship which is set to be hosted in Ghana.

Members of the foundation were at the team’s camp in Prampram on Tuesday, October 11 and presented a list of items.

The items included boxes of water from Paradise Pac, packs of toilet rolls and sanitary towels from Chrisbil Company Limited, boxes of chocolate, and hair products from Maxim Ghana Limited among others.

After the presentation, founder of the foundation, Mavis Amanor, urged the team to remain focus and put in extra work as the tournament approaches.

‘’I want you to know that we are fully behind you, just work hard. People see women football in a different taste in this country but I urge you to make us proud so that other cooperate entities will also support you in the near future’’.

Head coach, Bashir Hayford was full of praise for the foundation and further appealed to the public to emulate VISMA’s gesture and promised the team would make the country proud.

The female senior team have been in camp for the past two months preparing for the competition which comes off in November.

The Black Queens have been tasked to win the competition for the first time this year.

VISMA Foundation is a non-profitable organization whose focus is on boy and girl child education through sports.

More about the foundation; http://www.vismafoundation.com/about.html