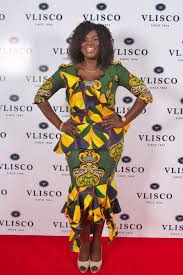 Textile giant, Vlisco, has launched celebrations to mark its 170th anniversary, dedicating it women who have largely contributed to its success.

Famous for its bold and beautiful designs, the launch was rolled out in an equally striking manner, with the unveiling of Ghanaian TV icon Anita Erskine, as the face of the campaign amongst an audience of Ghana’s fashion elite.

Due to its strong connection with Africa, the brand is marking this major milestone by honouring African women, as they’ve played an indispensable role in their success.

He said, “We would like to pay tribute to our Trade Partners who have always been with us on this journey all these years. To our designers, tailors and seamstresses, we are grateful for your creativity in turning Vlisco fabrics into elegant and stylish fashion. We could not have come this far without you.”

He added that, “Vlisco has a strong connection with Africa, especially African women. Because of this, we would like to mark the celebrations by honouring African women, as they have played indispensable roles in the success of the brand.

As part of the celebration, Vlisco has asked seven women from six different countries in Central and West Africa, to be the faces of the 170 years campaign.

This includes the world famous, Grammy winning African singer Angelique Kidjo. With their inspiring stories, Vlisco is celebrating the pride, perseverance and strength of African women who share their passion for Vlisco and their commitment to society.

The face of Ghana’s Vlisco 170th anniversary Anita Erskine, said, “Anyone that knows me knows how much I love the Vlisco brand. Wearing Vlisco allows me to stand out with pride, enabling me to celebrate my love for Africa. Vlisco has always held a special place in my heart and I could not be more honoured to be chosen as the face of their anniversary campaign.”

As part of her role as the face of the 170th anniversary campaign, Anita will be featured across various media in a special documercial, vibrant new billboards and across other outlets, showcasing her drive, passion, style and engagement in society.

The 2016 Vlisco Ambassador Regina Honu, was also in attendance, sharing Anita’s excitement; she praised Vlisco’s ability to break boundaries in design and style.

In line with the campaign theme ‘Female Empowerment’, Vlisco demonstrated how important supporting women is to their mission and values by making a generous donation to a charitable cause chosen by the face of the campaign, Anita Erskine. The donation was made in support of Najaat Hussein’s education.

There was an Avant-Garde themed fashion show which featured exciting and extravagant designs by Samson Creations, VH Mode by Vanessa Harrison, Royal Dennis, Sarah Richards and Stylista, with make-up and jewelry provided by Maybelline New York and Armanda’s Jewelry respectively.

The launch event marks the beginning of a three-month campaign that will commemorate 170 years of Vlisco being an authentic part of African culture.

As part of the anniversary campaign, Vlisco will be running a series of special promotional events, competitions and exhibitions for the rest of the year.

The Vlisco Group designs, produces and distributes fashion fabrics for the West and Central African market and African consumers in global metropolitan cities.

Founded in Helmond, The Netherlands, in 1846, the Vlisco Group and their fabrics have grown into an essential part of African culture, receiving widespread attention from the art, design and fashion worlds.

The company’s head office is located in Helmond as well as the design- and production facilities for the Vlisco brand. For the other brands these facilities are based in Ghana and Ivory Coast.

The Vlisco Group has 8 sales offices in numerous African countries and around 2,700 employees, (900 in The Netherlands and 1800 in Africa).